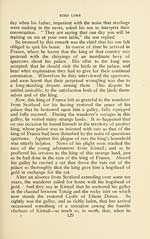 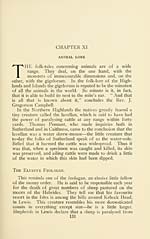 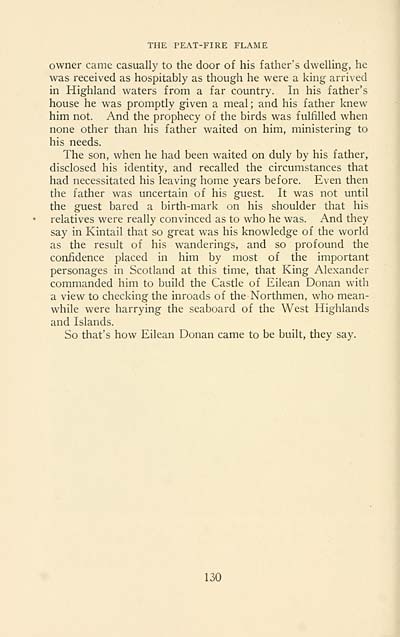 THE PEAT-FIRE FLAME
owner came casually to the door of his father's dwelling, he
was received as hospitably as though he were a king arrived
in Highland waters from a far country. In his father's
house he was promptly given a meal ; and his father knew
him not. And the prophecy of the birds was fulfilled when
none other than his father waited on him, ministering to
his needs.
The son, when he had been v^aited on duly by his father,
disclosed his identity, and recalled the circumstances that
had necessitated his leaving home years before. Even then
the father was uncertain of his guest. It was not until
the guest bared a birth-mark on his shoulder that his
relatives were really convinced as to who he was. And they
say in Kintail that so great was his knowledge of the world
as the result of his wanderings, and so profound the
confidence placed in him by most of the important
personages in Scotland at this time, that King Alexander
commanded him to build the Castle of Eilean Donan with
a view to checking the inroads of the Northmen, who mean-
while were harrying the seaboard of the West Highlands
and Islands.
So that's how Eilean Donan came to be built, they say.
130