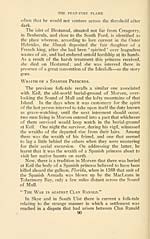 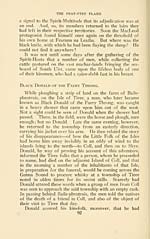 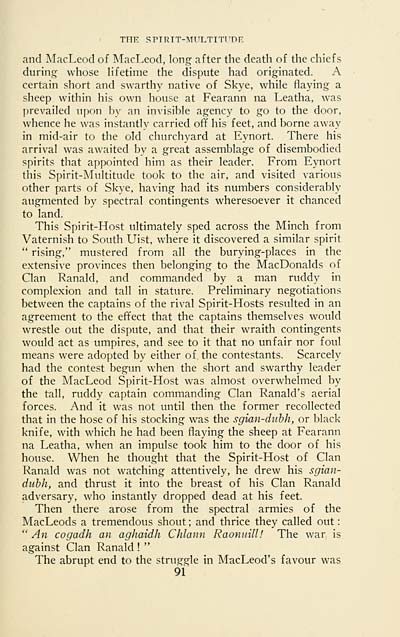 THE SPTRTT-MULTITrnr,
and MacLeod of MacLeod, long after the death of the chiefs
during- whose lifetime the dispute had originated. A
certain short and swarthy native of Skye, while flaying a
sheep within his own house at Fearann na Leatha, was
l)revailed upon by an invisible agency to go to the door,
whence he was instantly carried off his feet, and borne away
in mid-air to the old churchyard at Eynort. There his
arrival was awaited by a great assemblage of disembodied
spirits that appointed him as their leader. From Eynort
this Spirit-Multitude took to the air, and visited various
other parts of Skye, having had its numbers considerably
augmented by spectral contingents wheresoever it chanced
to land.
This Spirit-Host ultimately sped across the Minch from
Vaternish to South Uist, where it discovered a similar spirit
" rising," mustered from all the burying-places in the
extensive provinces then belonging to the MacDonalds of
Clan Ranald, and commanded by a man ruddy in
complexion and tall in stature. Preliminary negotiations
between the captains of the rival Spirit-Hosts resulted in an
agreement to the effect that the captains themselves would
wrestle out the dispute, and that their wraith contingents
would act as umpires, and see to it that no unfair nor foul
means were adopted by either of the contestants. Scarcely
had the contest begun when the short and swarthy leader
of the MacLeod Spirit-Host was almost overwhelmed by
the tall, ruddy captain commanding Clan Ranald's aerial
forces. And it was not until then the former recollected
that in the hose of his stocking was the sgian-duhh, or black
knife, with which he had been flaying the sheep at Fearann
na Leatha, when an impulse took him to the door of his
house. When he thought that the Spirit-Host of Clan
Ranald was not watching attentively, he drew his sgian-
duhh, and thrust it into the breast of his Clan Ranald
adversary, who instantly dropped dead at his feet.
Then there arose from the spectral armies of the
MacLeods a tremendous shout ; and thrice they called out :
" An cogadh an aghaidh Chlann RaonuiU! The war is
against Clan Ranald ! "
The abrupt end to the struggle in MacLeod's favour was
91