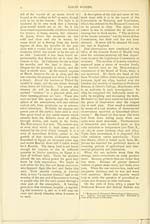 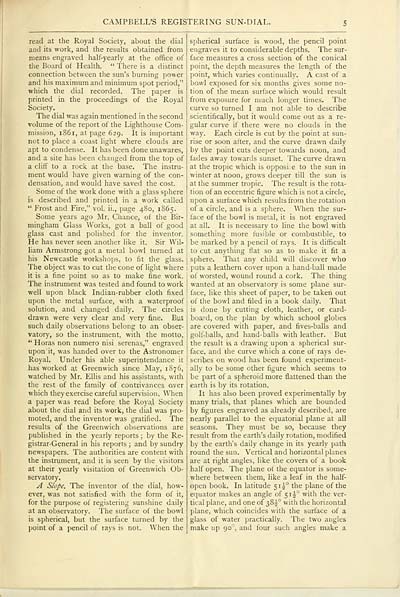 CAMPBELL'S REGISTERING SUN-DIAL.
read at the Royal Society, about the dial
and its work, and the results obtained from
means engraved half-yearly at the office of
the Board of Health. " There is a distinct
connection between the sun's burning po«er
and his maximum and minimum spot period,"
which the dial recorded. The paper is
printed in the proceedings of the Royal
Society.
The dial was again mentioned in the second
volume of the report of the Lighthouse Com-
mission, 1861, at page 629. It is important
not to place a coast light where clouds are
apt to condense. It has been done unawares,
and a site has been changed from the top of
a cliff to a rock at the base. The instru-
ment would have given warning of the con-
densation, and would have saved the cost.
Some of the work done with a glass sphere
is described and printed in a work called
" Frost and Fire," vol. ii., page 480, 1S65.
Some years ago Mr. Chance, of the Bir-
mingham Glass Works, got a ball of good
glass cast and polished for the inventor.
He has never seen another like it. Sir Wil-
liam Armstrong got a metal bowl turned at
his Newcastle workshops, to fit the glass.
The object was to cut the cone of light where
it is a fine point so as to make fine work.
The instrument was tested and found to work
well upon black Indian-rubber cloth fixed
upon the metal surface, with a waterproof j
solution, and changed daily. The circles
drawn were very clear and very fine. But
such daily observations belong to an obser-
vatory, so the instrument, with the motto,
" Horas non numero nisi serenas," engraved
upon it, was handed over to the Astronomer
Royal. Under his able superintendance it
has worked at Greenwich since May, 1876,
watched by Mr. Ellis and his assistants, with
the rest of the family of contrivances over
which theyexercise careful supervision. When
a paper was read before the Royal Society
about the dial and its work, the dial was pro-
moted, and the inventor was gratified. The
results of the Greenwich observations are
published in the yearly reports ; by the Re-
gistrar-General in his reports ; and by sundry
newspapers. The authorities are content with
the instrument, and it is seen by the visitors
at their yearly visitation of Greenwich Ob-
servatory.
A Slope. The inventor of the dial, how-
ever, was not satisfied with the form of it,
for the purpose of registering sunshine daily
at an observatory. The surface of the bowl
is spherical, but the surface turned by the
point of a pencil of rays is not. When the
spherical surface is wood, the pencil point
engraves it to considerable depths. The sur-
face measures a cross section of the conical
point, the depth measures the length of the
point, which varies continually. A cast of a
bowl exposed for six months gives some no-
tion of the mean surface which would result
from exposure for much longer times. The
curve so turned I am not able to describe
scientifically, but it would come out as a re-
gular curve if there were no clouds in the
way. Each circle is cut by the point at sun-
rise or soon after, and the curve drawn daily
by the point cuts deeper towards noon, and
fades away towards sunset. The curve drawn
at the tropic which is opposi.e to the sun in
winter at noon, grows deeper till the sun is
at the summer tropic. The result is the rota-
tion of an eccentric figure which is not a circle,
upon a surface which results from the rotation
of a circle, and is a sphere. When the sur-
lace of the bowl is metal, it is not engraved
at all. It is necessary to line the bowl with
something more fusible or combustible, to
be marked by a pencil of rays. It is difficult
to cut anything fiat so as to make it fit a
sphere. That any child will discover who
puts a leathern cover upon a hand-ball made
of worsted, wound round a cork. The thing
wanted at an observatory is some plane sur-
face, like this sheet of paper, to be taken out
of the bowl and filed in a book daily. That
is done by cutting cloth, leather, or card-
board, oij the plan by which school globes
are covered with paper, and fives-balls and
golf-.balls, and hand-balls with leather. But
the result ia a drawing upon a spherical sur-
face, and the curve which a cone of rays de-
scribes on wood has been found experiment-
ally to be some other figure which seems to
be part of a spheroid more flattened than the
earth is by its rotation.
It has also been proved experimentally by
many trials, that planes which are bounded
by figures engraved as already described, are
nearly parallel to the equatorial plane at all
seasons. They must be so, because they
result from the earth's daily rotation, modified
by the earth's daily change in its yearly path
round the sun. Vertical and horizontal planes
are at right angles, like the covers of a book
half open. The plane of the equator is some-
where between them, like a leaf in the half-
open book. In latitude 51^-° the plane of the
equator makes an angle of 515-° with the ver-
tical plane, and one of 38i° with the horizontal
plane, which coincides with the surface of a
glass of water practically. The two angles
make up 90", and four such angles make a