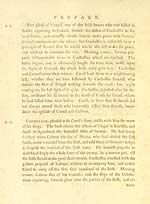 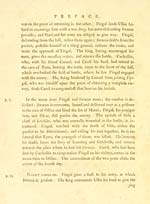 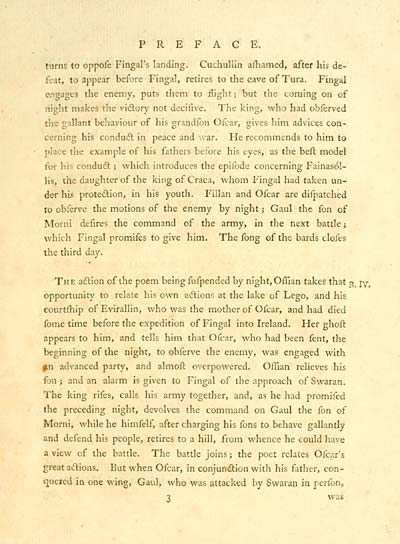 PREFACE.
turns to oppofe Fingal's landing. Cuchullin artiamed, after his de-
feat, to appear before Fingal, retires to the cave of Tura. Fingal
engages the enemy, puts them to flight; but the coming on of
night makes the vi6lory not decifive. The king, who had obferved
the gallant behaviour of his grandfon Ofcar, gives him advices con-
cerning his condudl in peace and war. He recommends to him to
place the example of his fathers before his eyes, as the befl model
for his condudl ; which introduces the epifode concerning Fainasol-
lis, the daughter of the king of Craca, whom Fingal had taken un-
der his protedlion, in his youth. Fillan and Ofcar are difpatched
to obferve the motions of the enemy by night ; Gaul the fon of
Morni defires the command of the army, in the next battle ;
which Fingal promifes to give him. The fong of the bards clofes
the third day.
The adion of the poem being fufpended by night, Offian takes that p jy^
opportunity to relate his own adlions at the lake of Lego, and his
courtfhip of Evirallin, who was the mother of Ofcar, and had died
fome time before the expedition of Fingal into Ireland. Her ghoft
appears to him, and tells him that Ofcar, who had been fent, the
beginning of the night, to obferve the enemy, was engaged with
^n advanced party, and almoft overpowered. Oflian relieves his
fon ; and an alarm is given to Fingal of the approach of Swaran.
The king rifes, calls his army together, and, as he had promifed
the preceding night, devolves the command on Gaul the fon of
Morni, while he himfelf, after charging his fons to behave gallantly
and defend his people, retires to a hill, from whence he could have
a view of the battle. The battle joins j the poet relates Ofcar's
great adions. But when Ofcar, in conjundlion with his father, con-
quered in one wing, Gaul, who was attacked by Swaran in perfon,
3 was