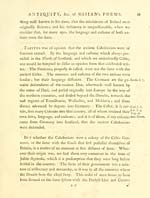 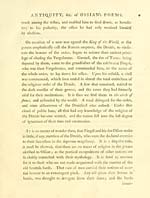 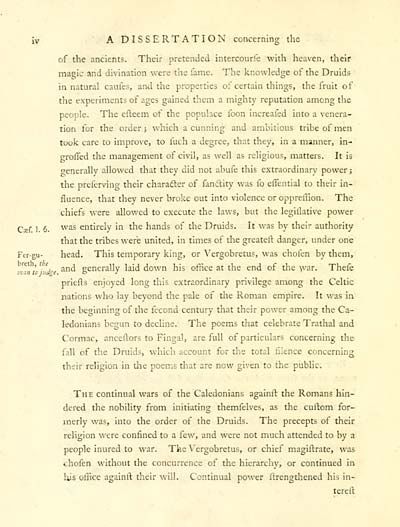 iv A DISSERTATION concerning the
of the ancients. Their pretended intercourfe with heaven, their
magic and divination were the fame. The knowledge of the Druids
in natural caufes, and the properties of certain things, the fruit of
the experiments of ages gained them a mighty reputation among the
people. The efteem of the populace foon increafed into a venera-
tion for the order j which a cunning and ambitious tribe of men
took care to improve, to fuch a degree, that they, in a manner, in-
groifed the management of civil, as well as religious, matters. It is
generally allowed that they did not abufe this extraordinary power ;
the preferving their charadter of fan>£tity was fo elTential to their in-
fluence, that they never broke out into violence or opprelllon. The
chiefs were allowed to execute the laws, but the legiilative power
Csf. 1. 6. ^^'^^ entirely in the hands of the Druids. It was by their authority
that the tribes were united, in times of the greateft danger, under one
Fer-gu- head. This temporary king, or Vergobretus, was chofen by them,
Jnnt/'udee ^"^ generally laid down his office at the end of the war. Thefe
priefts enjoyed long this extraordinary privilege among the Celtic
atations who lay beyond the pale of the Roman empire. It was in
the beginning of the fecond century that their power among the Ca-
ledonians begun to decline. The poems that celebrate Trathal and
Cormac, anceftors to Fingal, are full of particulars concerning the
fall of the Druids, which account for the total fiicncc concerning
their religion in tlie poems that are now given to the public.
The continual wars of the Caledonians againll: the Romans hin-
dered the nobility from initiating themfelves, as the cullom for-
merly was, into the order of the Druids. The precepts of their
religion were confined to a few, and were not much attended to by a
people inured to war. The \'ergobretus, or chief magiflrate, was
chofen without the concurrence of the hierarchy, or continued in
liis ottice againft their will. Continual power rtrengthened his in-
tereft