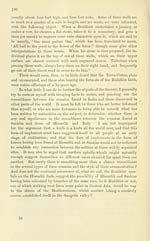 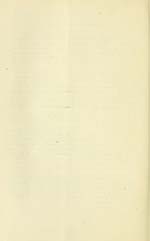 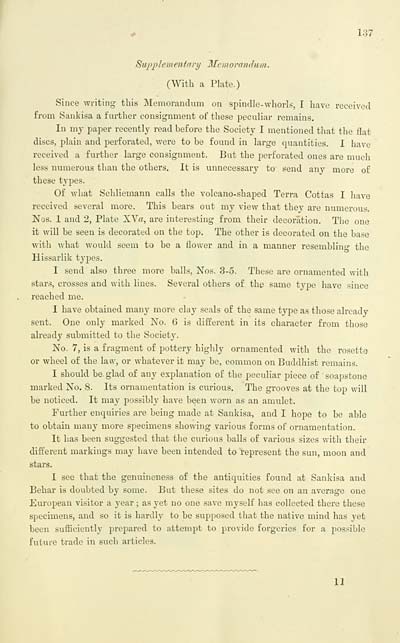 137
Suj^2^ /em en ta i •// Me m or an (him .
(With a Plate.)
Since writing this Memorandum on spindle -whorls, I have received
from Sankisa a further consignment of these peculiar remains.
In my paper recently read before the Society I mentioned that the flat
discs, plain and perforated, were to be found in large quantities. I have
received a further large consignment. But the perforated ones are much
less numerous than the others. It is unnecessary to send any more of
these types.
Of what Schliemann calls the volcano-shaped Terra Cottas I have
received several more. This bears out my view that they are numerous.
Nos. 1 and 2, Plate XVos, are interesting from their decoration. The one
it will be seen is decorated on the top. The other is decorated on the base
with what would seem to be a flower and in a manner resemblino- the
Hissarlik types.
I send also three more balls, Nos. 3-5. These are ornamented with
stars, crosses and with lines. Several others of the same type have since
reached me.
I have obtained many more clay seals of the same type as those already
sent. One only marked No. 6 is different in its character from those
already submitted to the Society.
No. 7, is a fragment of pottery highly ornamented with the rosette
or wheel of the law, or whatever it may be, common on Buddhist remains.
I should be glad of any explanation of the peculiar piece of soapstone
marked No. 8. Its ornamentation is curious. The grooves at the top will
be noticed. It may possibly have been worn as an amulet.
Further enquiries are being made at Sankisa, and I hope to be able
to obtain many more specimens showing various forms of ornamentation.
It has been suggested that the curious balls of various sizes with their
different markings may have been intended to represent the sun, moon and
stars.
I see that the genuineness of the antiquities found at Sankisa and
Behar is doubted by some. But these sites do not see on an average one
European visitor a year ; as yet no one save myself has collected there these
specimens, and so it is hardly to be supposed that the native mind has yet
been suflSciently prepared to attempt to provide forgeries for a possible
future trade in such articles.
11