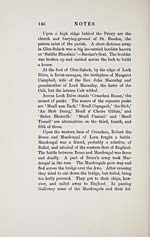 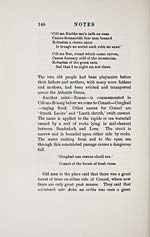 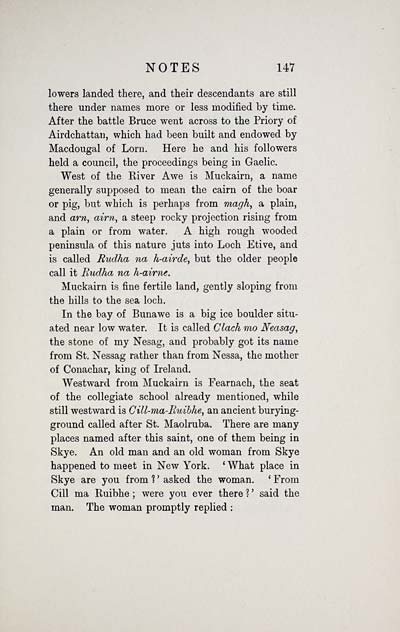 NOTES 147
lowers landed there, and their descendants are still
there under names more or less modified by time.
After the battle Bruce went across to the Priory of
Airdchattan, which had been built and endowed by
Macdougal of Lorn. Here he and his followers
held a council, the proceedings being in Gaelic.
West of the River Awe is Muckairn, a name
generally supposed to mean the cairn of the boar
or pig, but which is perhaps from magh, a plain,
and am, aim, a steep rocky projection rising from
a plain or from water. A high rough wooded
peninsula of this nature juts into Loch Etive, and
is called Rudha na h-airde, but the older people
call it Rudha na h-airne.
Muckairn is fine fertile land, gently sloping from
the hills to the sea loch.
In the bay of Bunawe is a big ice boulder situ-
ated near low water. It is called Clach mo Neasag,
the stone of my Nesag, and probably got its name
from St. Nessag rather than from Nessa, the mother
of Conachar, king of Ireland.
Westward from Muckairn is Fearnach, the seat
of the collegiate school already mentioned, while
still westward is Gill-ma-Ridhhe, an ancient burjdng-
ground called after St. Maolruba. There are many
places named after this saint, one of them being in
Skye. An old man and an old woman from Skye
happened to meet in New York. ' What place in
Skye are you from ? ' asked the woman. * From
Gill ma Ruibhe ; were you ever there ? ' said the
man. The woman promptly replied :