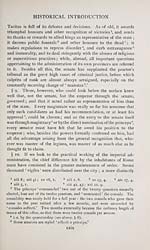 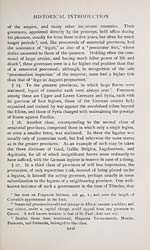 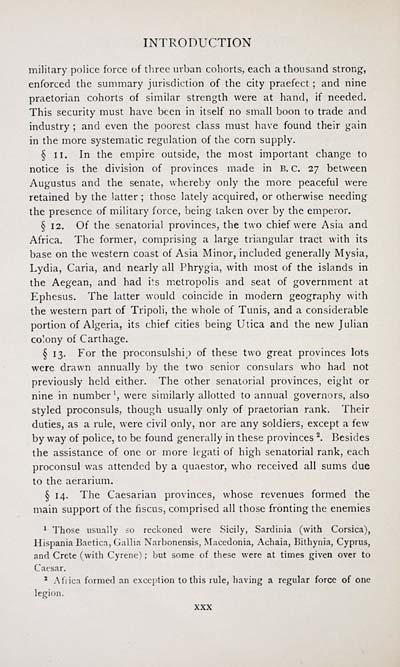 INTRODUCTION
military police force of three urban cohorts, each a thousand strong,
enforced the summary jurisdiction of the city praefect ; and nine
praetorian cohorts of similar strength were at hand, if needed.
This security must have been in itself no small boon to trade and
industry ; and even the poorest class must have found their gain
in the more systematic regulation of the corn supply.
§ II. In the empire outside, the most important change to
notice is the division of provinces made in B. c. 27 between
Augustus and the senate, whereby only the more peaceful were
retained by the latter ; those lately acquired, or otherwise needing
the presence of military force, being taken over by the emperor.
§ 12. Of the senatorial provinces, the two chief were Asia and
Africa. The former, comprising a large triangular tract with its
base on the western coast of Asia Minor, included generally Mysia,
Lydia, Caria, and nearly all Phrygia, with most of the islands in
the Aegean, and had its metropolis and seat of government at
Ephesus. The latter would coincide in modern geography with
the western part of Tripoli, the whole of Tunis, and a considerable
portion of Algeria, its chief cities being Utica and the new Julian
colony of Carthage.
§ 13. For the proconsulshi^j of these two great provinces lots
were drawn annually by the two senior consulars who had not
previously held either. The other senatorial provinces, eight or
nine in number', were similarly allotted to annual governors, also
styled proconsuls, though usually only of praetorian rank. Their
duties, as a rule, were civil only, nor are any soldiers, except a few
by way of police, to be found generally in these provinces ''■. Besides
the assistance of one or more legati of high senatorial rank, each
proconsul was attended by a quaestor, who received all sums due
to the aerarium.
§ 14. The Caesarian provinces, whose revenues formed the
main support of the fiscus, comprised all those fronting the enemies
' Those usually .-o reckoned were .Sicily, Sardinia (with Corsica),
HispaniaBaetica, Gallia Narbonensis, Macedonia, Achaia, Bithynia, Cyprus,
and Crete (with Cyrene) ; but some of these were at times given over to
Caesar.
' Afiica formed an exccjition to this rule, having a regular force of one
legion.
XXX