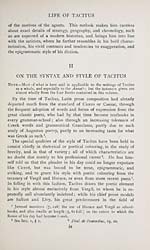 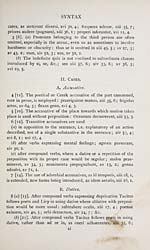 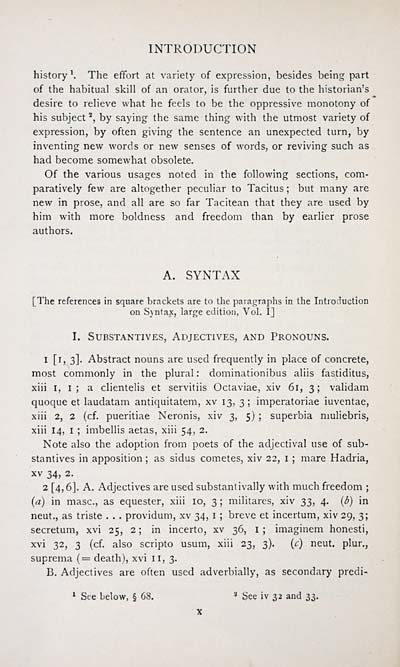 INTRODUCTION
history'. The effort at variety of expression, besides being part
of the habitual skill of an orator, is further due to the historian's
desire to relieve what he feels to be the oppressive monotony of
his subject ", by saying the same thing with the utmost variety of
expression, by often giving the sentence an unexpected turn, by
inventing new words or new senses of words, or reviving such as
had become somewhat obsolete.
Of the various usages noted in the following sections, com-
paratively few are altogether peculiar to Tacitus ; but many are
new in prose, and all are so far Tacitean that they are used by
him with more boldness and freedom than by earlier prose
authors.
A. SYNTAX
[The references in square brackets are to the paragraphs in the Introduction
on Syntax, large edition, Vol. I]
I. Substantives, Adjectives, and Pronouns.
1 [i, 3]. Abstract nouns are used frequently in place of concrete,
most commonly in the plural : dominationibus aliis fastiditus,
xiii I, I ; a clientelis et servitiis Octaviae, xiv 61, 3; validam
quoque et laudatam antiquitatem, xv 13, 3; imperatoriae iuventae,
xiii 2, 2 (cf. pueritiae Neronis, xiv 3, 5) ; superbia nmliebris,
xiii 14, I ; imbellis aetas, xiii 54, 2.
Note also the adoption from poets of the adjectival use of sub-
stantives in apposition ; as sidus cometes, xiv 22, i ; mare Hadria,
XV 34, 2.
2 [4,6]. A. Adjectives are used substantivally with much freedom ;
(a) in masc, as equester, xiii 10, 3 ; militares, xiv 33, 4. (i) in
neut., as triste . . . providum, xv 34, I ; breve et incertum, xiv 29, 3;
secretum, xvi 25, 2 ; in incerto, xv 36, I ; imaginem honesti,
xvi 32, 3 (cf. also scripto usum, xiii 23, 3). (c) neut. plur.,
suprema (= death), xvi 11, 3.
B. Adjectives are often used adverbially, as secondary predi-
* See below, § 08. * See iv 32 and 33.