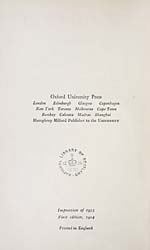 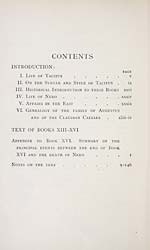 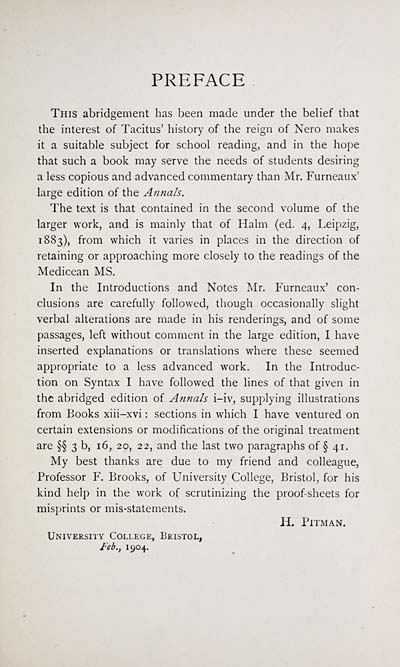 PREFACE
This abridgement has been made under the belief that
the interest of Tacitus' history of the reign of Nero makes
it a suitable subject for school reading, and in the hope
that such a book may serve the needs of students desiring
a less copious and advanced commentary than Mr. Furneaux'
large edition of the Annals.
The text is that contained in the second volume of the
larger work, and is mainly that of Halm (ed. 4, Leipzig,
1883), from which it varies in places in the direction of
retaining or approaching more closely to the readings of the
Medicean MS.
In the Introductions and Notes Mr. Furneaux' con-
clusions are carefully followed, though occasionally slight
verbal alterations are made in his renderings, and of some
passages, left without comment in the large edition, I have
inserted explanations or translations where these seemed
appropriate to a less advanced work. In the Introduc-
tion on Syntax I have followed the lines of that given in
the abridged edition of Antials i-iv, supplying illustrations
from Books xiii-xvi : sections in which I have ventured on
certain extensions or modifications of the original treatment
are §§ 3 b, 16, 20, 22, and the last two paragraphs of § 41.
My best thanks are due to my friend and colleague.
Professor F. Brooks, of University College, Bristol, for his
kind help in the work of scrutinizing the proof-sheets for
misprints or mis-statements.
H. Pitman.
University College, Bristol,
Feb., 1904.