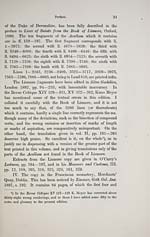 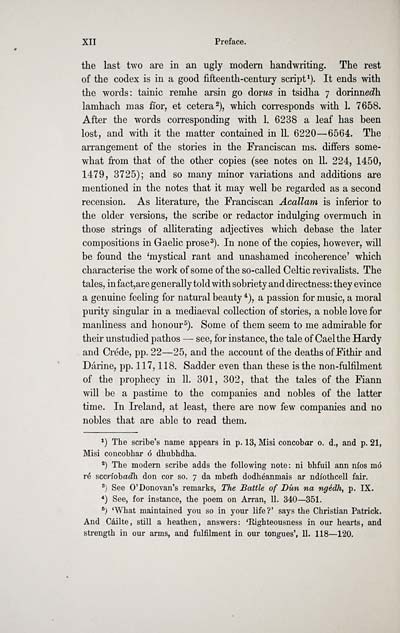 XII Preface.
the last two are in an ugly modern handwriting. The rest
of the codex is in a good fifteenth-centuiy script*). It ends with
the words: tainic remhe arsin go dorws in tsidha 7 dorinneííh
lamhach mas fi'or, et cetera^), which corresponds with 1. 7658.
After the words corresponding with 1. 6238 a leaf has been
lost, and with it the matter contained in 11. 6220 — 6564. The
arrangement of the stories in the Franciscan ms. differs some-
what from that of the other copies (see notes on 11. 224, 1450,
1479, 3725); and so many minor variations and additions are
mentioned in the notes that it may well be regarded as a second
recension. As hterature, the Franciscan Acallam is inferior to
the older versions, the scribe or redactor indulging overmuch in
those strings of alUterating adjectives which debase the later
compositions in Gaehc prose^). In none of the copies, however, will
be found the 'mystical rant and unashamed incoherence' which
characterise the work of some of the so-called Celtic revivahsts. The
tales, in fact,are generally told with sobriety and directness: they evince
a genuine feeling for natural beauty ^), a passion for music, a moral
purity singular in a mediaeval collection of stories, a noble love for
manliness and honour ^). Some of them seem to me admirable for
their unstudied pathos — see, for instance, the tale of Gael the Hai'dy
and Créde, pp. 22 — 25, and the account of the deaths ofFithir and
Dárine, pp. 117, 118. Sadder even than these is the non-fulfilment
of the prophecy in 11. 301, 302, that the tales of the Fiann
will be a pastime to the companies and nobles of the latter
time. In Ireland, at least, there are now few companies and no
nobles that are able to read them.
*) The scribe's name appears in p. 13, Misi concobar 0. d., and p. 21,
Misi concobhar ó dhubhdha.
*) The modern scribe adds the following note: ni bhfuil ann nios mo
re sccriobadh don cor so. 7 da mbeih dodhéanmais ar ndiothcell fair.
*) See 0' Donovan's remarks, The Battle of Bun na ngédh, p. IX.
*) See, for instance, the poem on Arran, 11. 340—351.
•*) 'What maintained you so in your life?' says the Christian Patrick.
And Cáilte, still a heathen, answers: 'Righteousness in our hearts, and
strength in our arms, and fulfilment in our tongues', 11. 118—120.