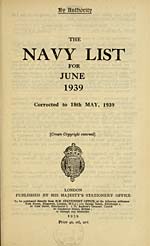 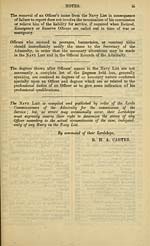 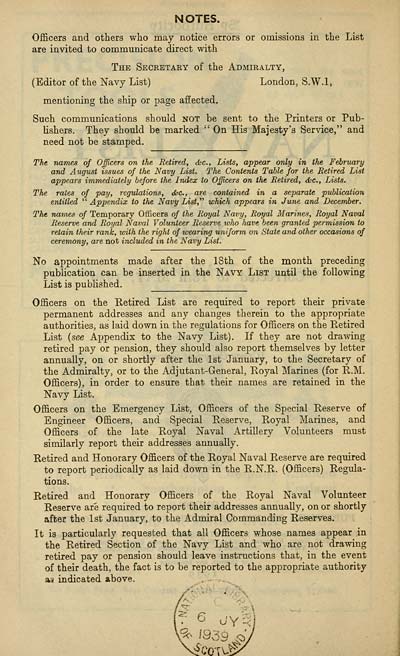 NOTES.
Officers and others who may notice errors or omissions in the List
are invited to communicate direct with
The Secretary of the Admiralty,
(Editor of the Navy List) London, S.W.I,
mentioning the ship or page affected.
Such communications should not be sent to the Printers or Pub-
lishers. They should be marked " On His Majesty's Service," and
need not be stamped.
The names of Officers on the Retired, &c, Lists, appear only in the February
and August issues of the Navy List. The Contents Table for the Retired List
appears immediately before the Index to Officers on the Retired, &c, Lists.
The rates of pay, regulations, dsc, are contained in a separate publication
entitled " Appendix to the Navy List," which appears in June and December.
The names of Temporary Officers of the Royal Navy, Royal Marines, Royal Naval
Reserve and Royal Naval Volunteer Reserve who have been granted permission to
retain tlieir rank, with the right of wearing uniform on State and other occasions of
ceremony, are not included in the Navy List.
No appointments made after the 18th of the month preceding
publication can be inserted in the Navy List until the following
List is published.
Officers on the Ketired List are required to report their private
permanent addresses and any changes therein to the appropriate
authorities, as laid down in the regulations for Officers on the Retired
List (see Appendix to the Navy List). If they are not drawing
retired pay or pension, they should also report themselves by letter
annually, on or shortly after the 1st January, to the Secretary of
the Admiralty, or to the Adjutant-General, Royal Marines (for R.M.
Officers), in order to ensure that their names are retained in the
Navy List.
Officers on the Emergency List, Officers of the Special Reserve of
Engineer Officers, and Special Reserve, Royal Marines, and
Officers of the late Royal Naval Artillery Volunteers must
similarly report their addresses annually.
Retired and Honorary Officers of the Royal Naval Reserve are required
to report periodically as laid down in the R.N.R. (Officers) Regula-
tions.
Retired and Honorary Officers of the Royal Naval Volunteer
Reserve are required to report their addresses annually, on or shortly
after the 1st January, to the Admiral Commanding Reserves.
It is particularly requested that all Officers whose names appear in
the Retired Section of the Navy List and who are not drawing
retired pay or pension should leave instructions that, in the event
of their death, the fact is to be reported to the appropriate authority
as indicated above.