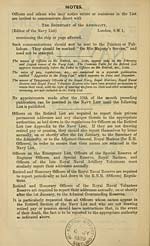 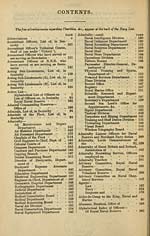 NOTES. iii
The removal of an Officer's name from the Navy List in consequence
of failure to report does not involve the termination of his commission
or relieve him of the liability for service, if required when Retired,
Emergency or Reserve Officers are called out in time of war or
emergency.
Officers who succeed to peerages, baronetcies, or courtesy titles
should immediately notify the same to the Secretary of the
Admiralty, in order that the necessary alterations may be made
in the Navy List and in the Official Records of the Admiralty.
The degrees shown after Officers' names in the Navy List are not
necessarily a complete list of the Degrees held but. generally
speaking, are confined to degrees of an honorary nature conferred
specially upon an Officer and degrees which are so related to the
professional duties of an Officer as to give some indication of his
professional qualifications.
The Navy List is compiled and published by order of the Lords
Commissioners of the Admiralty for the convenience of the
Service ; but, as errors may occasionally occur, their Lordships
must expressly reserve their right to determine the status of any
Officer according to the actual circumstances of the case, independ-
ently of any Entry in the Navy List.
By command of their Lordships,
R. H. A. CARTER.