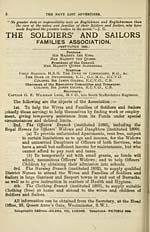 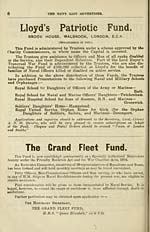 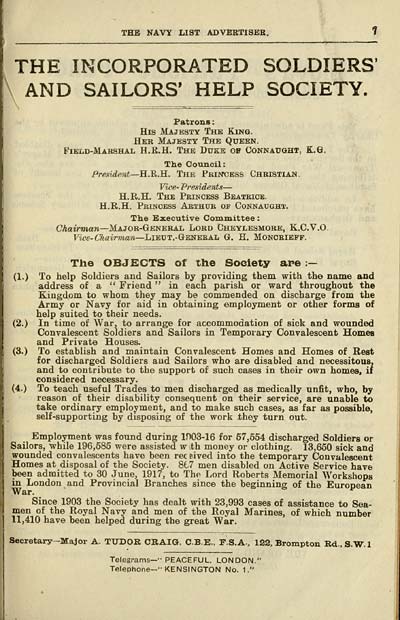 THE NAVY LIST ADVERTISER.
THE INCORPORATED SOLDIERS'
AND SAILORS' HELP SOCIETY.
Patrons :
His Majesty The Kino.
Her Majesty The Queen.
Field-Marshal H.R.H. The Duke of Connaught, K.G.
The Council:
President— H.R.H. The Princess Christian.
Vice- Presidents —
H.R.H. The Princess Beatrice.
H.R.H. Princess Arthur of Connaught.
The Executive Committee :
Chairman— Major-General Lord Cheylesmore, K.C.V.O.
Vice- Chairman— Lieut.-General G. H. Moncrieff.
The OBJECTS of the Society ape :—
(1.) To help Soldiers and Sailors by providing them with the name and
address of a " Friend " in each parish or ward throughout the
Kingdom to whom they may be commended on discharge from the
Army or Navy for aid in obtaining employment or other forms of
help suited to their needs.
(2.) In time of War, to arrange for accommodation of sick and wounded
Convalescent Soldiers and Sailors in Temporary Convalescent Homes
and Private Houses.
(3.) To establish and maintain Convalescent Homes and Homes of Rest
for discharged Soldiers and Sailors who are disabled and necessitous,
and to contribute to the support of such cases in their own homes, it
considered necessary.
(4.) To teach useful Trades to men discharged as medically unfit, who, by
reason of their disability consequent on their service, are unable to
take ordinary employment, and to make such cases, as far as possible,
self-supporting by disposing of the work they turn out.
Employment was found during 1D03-16 for 57,554 discharged Soldiers or
Sailors, while 196,585 were assisted w th money or clothing. 13,650 sick and
wounded convalescents have been rec Bived into the temporary Convalescent
Homes at disposal of the Society. 817 men disabled on Active Service have
been admitted to 30 June, 1917, to The Lord Roberts Memorial Workshops
in London and Provincial Branches since the beginning of the European
War.
Since 1903 the Society has dealt with 23,993 cases of assistance to Sea-
men of the Royal Navy and men of the Royal Marines, of which number
11,410 have been helped during the great War.
Secretary-Major A. TUDOR CRAIG, C.B.E., F.S.A-, 122, Brompton Rd., S.W. 1
Telegrams—" PEACEFUL. LONDON."
Telephone— "KENSINGTON No. 1."