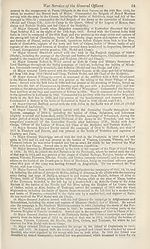 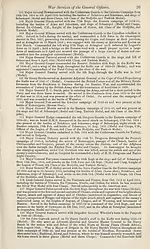 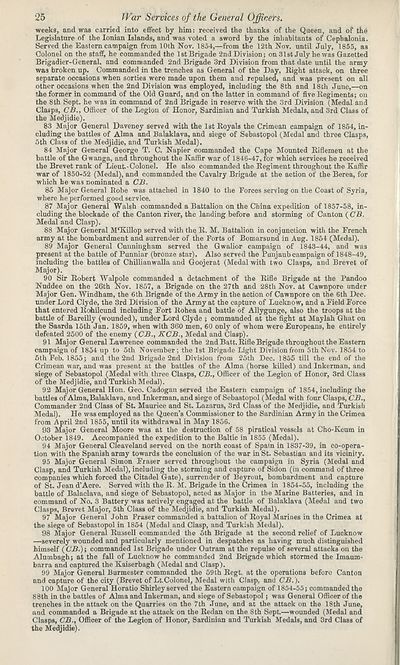 25 TVar Services of the General Officers.
weeks, and was carried into effect by him: received the thanks of the Queen, and of the
Legislature of the Ionian Islands, and was voted a sword by the inhabitants of Cephalonia.
Served the Eastern campaign from 10th Nov. 1854,—from the 12th Nov. until July, 1855, as
Colonel on the staff, he commanded the 1st Brigade 2nd Division; on 31st July he was Gazetted
Brigadier-General, and commanded 2nd Brigade 3rd Division from that date until the army
was broken up. Commanded in the trenches as General of the Day, Right attack, on three
separate occasions when sorties were made upon them and repulsed, and was present on all
other occasions when the 2nd Division was employed, including the 8th and 18th June,—on
the former in command of the Old Guard, and on the latter in command of five Regiments; on
the 8th Sept. he was in command of 2nd Brigade in reserve with the 3rd Division (Medal and
Clasps, CB., Officer of the Legion of Honor, Sardinian and Turkish Medals, and 3rd Class of
the Medjidie).
83 Major General Daveney served with the 1st Royals the Crimean campaign of 1854, in¬
cluding the battles of Alma and Balaklava, and siege of Sebastopol (Medal and three Clasps,
5th Class of the Medjidie, and Turkish Medal),
84 Major General George T. C. Napier commanded the Cape Mounted Riflemen at the
battle of the Gwanga, and throughout the Kaffir war of 1846-47, for which services he received
the Brevet rank of Lieut-Colonel. He also commanded the Regiment throughout the Kaffir
war of 1850-52 (Medal), and commanded the Cavalry Brigade at the action of the Berea, for
which he was nominated a CH.
85 Major General Robe was attached in 1840 to the Forces serving on tlie Coast of Syria,
where he performed good service.
87 Major General Walsh commanded a Battalion on the China expedition of 1857-58, in¬
cluding the blockade of the Canton river, the landing before and storming of Canton {CB.
Medal and Clasp).
88 Major General M^ullop served with the li. M. Battalion in conjunction with the French
army at the bombardment and surrender of the Forts of Bomarsund in Aug. 1854 (Medal).
89 Major General Cunningham served the Gwalior campaign of 1843-44, and was
present at the battle of Punniar (bronze star). Also served the Punjaubcampaign of 1848-49,
including the battles of Chillianwalla and Goojerat (Medal with two Clasps, and Brevet of
Major).
90 Sir Robert Walpole commanded a detachment of the Rifle Brigade at the Pandoo
Nuddee on the 26th Nov. 1857, a Brigade on the 27th and 28th Nov. at Cawnpore under
Major Gen. Windham, the 6th Brigade of the Army in the action of Cawnpore on the 6th Dec.
under Lord Clyde, the 3rd Division of the Army at the capture of Lucknow, and a Field Force
that entered Rohilcund including Fort Rohea and battle of AUygunge, also the troops at the
battle of Bareilly (wounded), under Lord Clyde ; commanded at the fight at Maylah Ghat on
the Saarda 15th Jan. 1859, when with 360 men, 60 only of whom were Europeans, he entirely
defeated 2500 of the enemy (CB., KCB., Medal and Clasp).
91 Major General Lawrence commanded the 2ndBatt. Rifle Brigade throughout the Eastern
campaign of 1854 up to 5tli November; the 1st Brigade Light Divisionfrom 5th Nov. 1854 to
6th Feb. 1855; and the 2nd Brigade 2nd Division from 25th Dec. 1855 till the end of the
Crimean war, and was present at the battles of the Alma (horse killed) and Inkerman, and
siege of Sebastopol (Medal with throe Clasps, CB., Officer of the Legion of Honor, 3rd Class
of the Medjidie, and Turkish Medal).
92 Major General Hon, Geo. Cadogan served the Eastern campaign of 18.54, including the
battles of Alma, Balaklava, and Inkerman, and siege of Sebastopol (Medal with four Clasps, CB.,
Commander 2nd Class of St. Maurice and St. Lazarus, 3rd Class of the Medjidie, and Turkish
Medal). He was employed as the Queen's Commissioner to the Sardinian Army in the Crimea
from April 2nd 1855, until its withdrawal in May 1856.
93 Major General Moore was nt the destruction of 58 piratical vessels at Cho-Keum in
Oi;tober 1849. Accompanied the expedition to the Baltic in 1855 (Medal).
94 Major General Cleaveland served on the north coast of Spain in 1837-39, in co-opera¬
tion with the Spanish army towards the conclusion of the war in St. Sebastian and its vicinity.
95 Major General Simon Eraser served throughout the campaign in Syria (Medal and
Clasp, and Turkish Medal), including the storming and capture of Sidon (in command of three
companies which forced the Citadel Gate), surrender of Beyrout, bombardment and capture
of St. Jean d'Acre. Served with the R. M. Brigade in the Crimea in 1854-55, including the
battle of Balaclava, and siege of Sebastopol, acted as Major in the Marine Batteries, and in
command of No. 3 Battery was actively engaged at the battle of Balaklava (Medal and two
Clasps, Brevet Major, 5th Class of the Medjidie, and Turkish Medal).
97 Major General John Fraser commanded a battalion of Royal Marines in the Crimea at
the siege of Sebastopol in 1854 (Medal and Clasp, and Turkish Medal).
98 Major General Russell commanded the 5th Brigade at the second relief of Lucknow
—severely wounded and particularly mentioned in despatches as having much distinguished
himself {CB.); commanded Ist Brigade under Outram at the repulse of several attacks on the
Alumbagh; at the fall of Lucknow he commanded 2nd Brigade which stormed the Imaum-
barra and captured the Kaiserbagh (Medal and Clasp).
99 Major General Burmester commanded the 59th Regt. at the operations before Canton
and capture of the city (Brevet of LtColonel, Medal witli Clasp, and CB.).
100 Major General Horatio Shirley served the Eastern campaign of 1854-55; commanded the
88th in the battles of Alma and Inkerman, and siege of Sebastopol ; was General Officer of the
trenches in the attack on the Quarries on the 7th .Tune, and at the attack on the 18th June,
and commanded a Brigade at the attack on the Redan on the 8th Sept.—wounded (Medal and
Clasps, CB., Officer of the Legion of Honor, Sardinian and Turkish Medals, and 3rd Class of
the Medjidie).