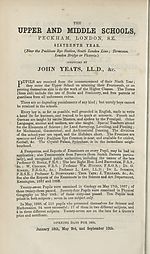 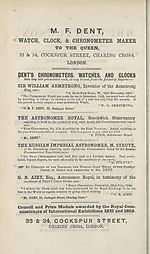 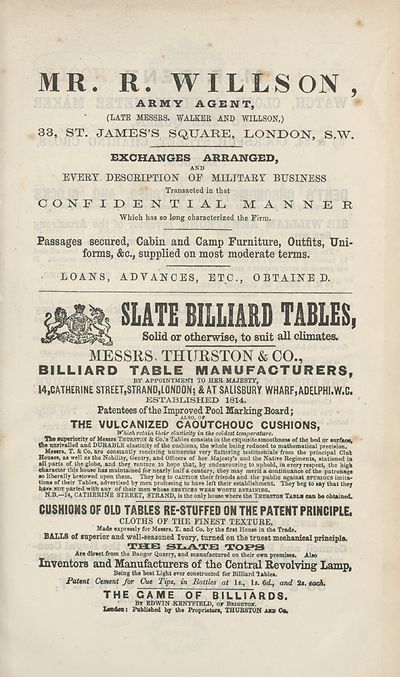 MR. R. WILLSON ,
ARMY AGENT,
(LATE MESSRS. WALKER AND WILLSON,)
33, ST. JAMES'S SQUARE, LONDON, S.W.
EXCHANGES ARRANGED,
AND
EVERT. DESCRIPTION OF MILITARY BUSINESS
Transacted in that
CONFIDENTIAL MANNER
Which has so long characterized the Firm.
Passages secured, Cabin and Camp Furniture, Outfits, Uni¬
forms, &c., supplied on most moderate terms.
LOANS, ADVANCES, ETC., OBTAINED.
SLATE BII.LIARD TABLES,
Solid or otherwise, to suit all climates.
MESSRS, THIIRSTON & CO.,
BILLIARD TABLE MANUFACTURERS,
BY APPOINTMENT TO HBR MAJESXy,
14,CATHER1NE STREET,STRAND,LONDON; & AT SALISBURY WHARF, ADELPHI.W.C.
ESTABLISHED 1814.
Patentees of the Improved Pool Marking Board:
ALSO, 0» °
THE VULCANIZED CAOUTCHOUC CUSHIONS,
}yhich rtitain their elasticity in tha coldest temperature.
Tba iuperioritj of Messra Thdrston & Co.'s Tables consists in the eiquisite smoothness of the bed or iurfaos,
the onriTalled and DURABLE elasticity of the cushions, the whole being reduced to mathematical precisian,
Messrs, T. & Co. are constantly recciring numerous very flattering testimonials from the principal Clut
Houses, as well as the Nobility, Gentry, and Ollicers of her Majesty's and the Natire Regiments, stationed in
all parts of the globe, and they Tentnrc to hope that, by endeavouring to uphold, in every respect, the higk
oharactor this house has maintained for nearly half a century, they may merit a continuance of the patronags
•0 liberally bestowed upon them. They beg to caution their friends and the public against spuriods imita¬
tions of their Tables, advertised by men professing to have left their establishment. They beg to say that they
have HOT parted with any of their men whose sbrvicbs werb worth rbtaimno.
N.B.—U, CATHERINE STREET, STRAND, is the only house where the Thorstom TlBU can be obtained.
CUSHIONS OF OLD TABLES RE-STUFFED ON THE PATENT PRINCIPLE.
CLOTHS OF THE FINEST TEXTUKE,
Made expressly for Messrs. T. and Co. by the first House in the Trade.
BALLS of Buperior and well-seasoned Ivory, turned on the truest mechanical principle.
•JCSLE SZa.A.'rJE: TOI»S
Are direct from the Bangor Quarry, and manufactured on their own premises. Also
Inventors and Manufacturers of the Central Revolving Lamp,
Being the best Light ever constructed for Billiard lables.
Patent Cement for Cue Tips, in Bottles at Is., Is. 6d., and 2«, eacA.
THE GAME OF BILLIARDS.
Bt EDWIN KKNTFIELD, of Briqhtoh.
Published bf the FropheUin, THURSTON An C«.