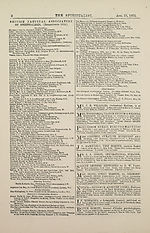 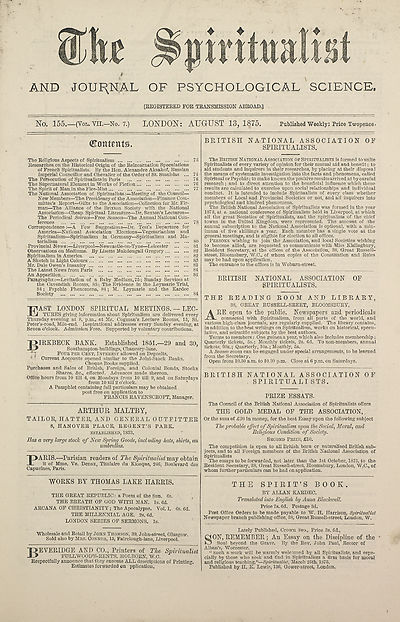 AMD JOURNAL OF PSYCHOLOGICAL SCIENCE.
[REGISTERED FOR TRANSMISSION ABROAD.] .
No. 155.—(Yol. YII.—No. 7.) LONDON: AUGrXJST 13, 1875. Published Weekly; Price Twopence.
(Contents.
The Religious Aspects of Spiritualism 73
Researches on the Historical Origin of the Reincarnation Speculations
of French Spiritualists. By the Hon. Alexandre Aksakof, Russian
Imperial Councillor and Chevalier of the Order of St. Stanislas ... 74
The Persecution of Spiritualists in Paris 76
The Supernatural Element in Works of Fiction 76
The Spirit of Man in the Fire-Mist 77
The National Association of Spiritualists:—Meeting of the Council—
New Members—The. Presidency of the Association—Finance Com¬
mittee’s Report—Gifts to the Association—Collection for Mr. Fir¬
man—The Alliance of the Brixton Society with the National
Association—Cheap Spiritual Literature—Dr. Sexton’s Lectures—
The Periodical Soirees—Free Seances—The Annual National Con¬
ference 78
Correspondence A Few Suggestions—Dr. Test’s Departure for
America—National Association Elections—Vegetarianism and
Spiritualism—Spiritualism in Germany—Spiritualism and Ma¬
terialism 80
Provincial News:—Liverpool—Newcastle-on-Tyne—Leicester 81
Observations on Mediums. By Lisette Makdougall Gregory 82
Spiritualism in America ■ 82
A Sketch in Light Colours 83
Mr. Dale Owen’s Insanity ... 83
The Latest News from Paris 84
An Apparition ... 84
Paragraphs:—Levitation of a Baby Medium,75; Sunday Services at
the Cavendish Rooms, 83-; The Evidence in the Leymarie Trial,
84; Psychic Phenomena, 84; M. Leymarie and the Kardec
Society ... 84
East London spiritual meetings. — lec¬
tures giving information about Spiritualism are delivered every
Thursday evening at 8, p.m., at Mr. Cogman’s Lecture Rooms, 15, St.
Peter’s-road, Mile-end. Inspirational addresses every Sunday evening, at
Seven o’clock. Admission Free. Supported by voluntary contributions.
EIRKBECK BANK. Established 1851.—29 and 30,
Southampton-buildings, Chancery-lane.
* J Four per Cent. Interest allowed on Deposits,
i ; Current Accounts opened similar to the Joint-Stock Banks.
Cheque Books supplied.
Purchases and Sales of British, Foreign, and Colonial Bonds, Stocks
Shares, &c., effected. Advances made thereon.
Offlhe hours from 10 till 4, on Mondays from 10 till 9, and on Saturdays
from 10 till 2 o’clock.
A Pamphlet containing full particulars may be obtained
post free on application to
FRANCIS RAVENSCROFT, Manager,
ARTHUR MALTBY,
TAILOR, HATTER, AND GENERAL OUTFITTER
8, HANOVER PLACE, REGENT’S PARK.
ESTABLISHED, 1833.
Has a very large stock of New Spring Goods, including hats, shirts, an
umbrellas.
PARIS.—Parisian readers of The Spiritualist may obtain
it of Mme. Ve. Denax, Titulaire du Kiosque, 246, Boulevard des
Capucines, Paris.
BRITISH NATIONAL ASSOCIATION OF
SPIRITUALISTS.
The British National Association of Spiritualists is formed to unite
Spiritualists of every variety of opinion for their mutual aid and benefit; to
aid students and inquirers in their researches, by placing at their disposal
the means of systematic investigation into the facts and phenomena, called
Spiritual or Psychic; to make known the positive results arrived at by careful
research; and to direct attention to the beneficial influence which those
results are calculated to exercise upon social relationships and individual
conduct. It is intended to include Spiritualists of every class whether
members of Local and Provincial Societies or not, and ail inquirers into
psychological and kindred phenomena.
The British National Association of Spiritualists was formed in the year
1873, at a national conference of Spiritualists held in Liverpool, at which
all the great Societies of Spiritualists, and the Spiritualists of the chief
towns in the United Kingdom, were represented. The amount of the
annual subscription to the National Association is optional, with a min¬
imum of five shillings a year. Each member has a single vote at the
general meetings, and is eligible for election to all offices.
Persons wishing to join the Association, and local Societies wishing
to become allied, are requested to communicate with Miss Kislingbury,
Resident Secretary, at the offices of the Association, 38, Great Russel 1-
street, Bloomsbury, W.C., of whom copies of the Constitution and Rules
may be had upon application.
The entrance to the offices is in Woburn-street.
BRITISH NATIONAL ASSOCIATION OF
SPIRITUALISTS.
THE READING ROOM AND LIBRARY,
38, GREAT RUSSELL-SREET, BLOOMSBURY,
ARE open to the public. Newspapers and periodicals
connected with Spiritualism, from all parts of the world, and
various high-class journals, are regularly-supplied. The library contains,
in addition to the best writings on Spiritualism, works on historical, specu¬
lative, and scientific subjects by the best authors.
Terms to members: One guinea a year, which also includes membership;
Quarterly tickets, 6s.; Monthly tickets, 2s. 6d. To non-members, annual
tickets, 80s.; Quarterly, 10s.; Monthly, 5s.
A Seance-room can be engaged under special arrangements, to be learned
from the Secretary.
Open from 10.30 a.m. to 10.30 p.m. Close at 6 p.m. on Saturdays.
BRITISH NATIONAL ASSOCIATION OF
. SPIRITUALI STS.
PRIZE ESSAYS.
The Council of the British National Association of Spiritualists offers
THE GOLD MEDAL OF THE ASSOCIATION,
Or the sum of £20 in money, for the best Essay upon the following subject
The probable effect of Spiritualism upon the Social, Moral, and
Religious Condition of Society.
Second Prize, £10.
The competition is open to all British born or naturalised British sub¬
jects, and to all Foreign members of the British National Association of
Spiritualists
The essays to be forwarded, not later than the 1st October, 1875. to the
Resident Secretary, 38, Great Russell-street, Bloomsbury, London, W.C., of
whom further particulars can be had on application.
WORKS BY THOMAS LAKE HARRIS.
, THE GREAT REPUBLIC: a Poem of the Sun. 6s. ■
THE BREATH OF GOD WITH MAN. Is. 6d.
ARCANA OF CHRISTIANITY; The Apocalypse. Vol. I. 6s. 6d.
THE MILLENNIAL AGE. 2s. 6d.
LONDON SERIES OF SERMONS. Is.'
Wholesale and Retail by John Thomson, 39, John-street, Glasgow.
Sold also by MRS. Connor, 15, Fairclough-lane, Liverpool.
BEYERIDGE AND CO., Printers of The- Spiritualist
FULLWOOD’S-RENTS, HOLBORN, W.C.
Respectfully announce that they execute ALL descriptions of Printing.
Estimates forwarded on pplication.
THE SPIRIT’S BOOK.
BY ALLAN KARDEC.
Translated into English by Anna Blaclmell.
Price 7s. 6d. Postage 3d.
Post Office Orders to be made payable to W. H. Harrison, Spiritualist
Newspaper branch publishing office, 38, Great Russell-street, London, W.
Lately Published, Crown 8vo., Price 3s. 6d.,
SON, REMEMBER; An Essay on the Discipline of the
Soul beyond the Grave. By the Rev. John Paul, Rector of
Alban’s, Worcester.
“ Such a work will be warmly welcomed by all Spiritualists, and espe¬
cially by those who seek and find in Spiritualism a firm basis for moral
and religious teaching.”—Spiritualist, March 25th, 1875.
Published by H. K. Lewis, 136, Gower-street, London,