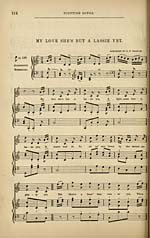 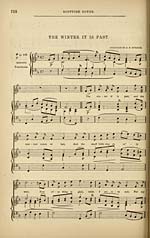 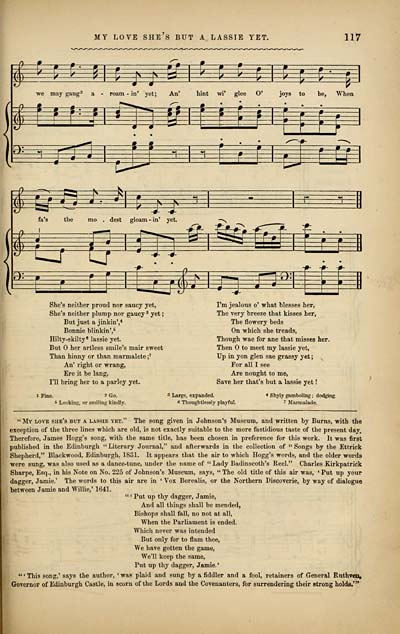 MY LOVE SHE S BUT A LASSIE YET.
117
^=E=EF^ ^^
h
we may gang 2 a - roam - in' yet; An' hint wi' glee O'
joys to be, When
f=t=*
i
m
S3
m
She's neither proud nor saucy yet,
I'm jealous o' what blesses her,
She's neither plump nor gaucy 3 yet ;
The very breeze that kisses her,
But just a jinkin',*
The flowery beds
Bonnie blinkin', 5
On which she treads,
Hilty-skilty' lassie yet.
Though wae for ane that misses her.
But her artless smile's mair sweet
Then to meet my lassie yet,
Than hinny or than marmalete ;'
Up in yon glen sae grassy yet ;
An' right or wrang,
For all I see
Ere it be lang,
Are nought to me,
I'll bring her to a parley yet.
Save her that's but a lassie yet !
l Fine. 2 Go.
3 Large, expanded. « Shyly gamboling ; dodging.
6 Looking, or smiling kindly.
6 Thoughtlessly playful. 7 Marmalade.
" My love she's but a lassie tet." The song given in Johnson's Museum, and written by Burns, with the
exception of the three lines which are old, is not exactly suitable to the more fastidious taste of the present day.
Therefore, James Hogg's song, with the same title, has been chosen in preference for this work. It was first
published in the Edinburgh " Literary Journal," and afterwards in the collection of " Songs by the Ettrick
Shepherd," Blackwood, Edinburgh, 1831. It appears that the air to which Hogg's words, and the older words
were sung, was also used as a dance-tune, under the name of " Lady Badinscoth's Reel." Charles Kirkpatrick
Sharpe, Esq., in his Note on No. 225 of Johnson's Museum, says, " The old title of this air was, ' Put up your
dagger, Jamie.' The words to this air are in ' Vox Borealis, or the Northern Discoverie, by way of dialogue
between Jamie and Willie,' 1641.
" ' Put up thy dagger, Jamie,
And all things shall be mended,
Bishops shall fall, no not at all,
When the Parliament is ended.
Which never was intended
But only for to flam thee,
We have gotten the game,
We'll keep the same,
Put up thy dagger, Jamie. '
" ' This song,' says the author, ' was plaid and sung by a fiddler and a fool, retainers of General Ruthven,
Governor of Edinburgh Castle, in scorn of the Lords and the Covenanters, for surrendering their atrong holda.'"