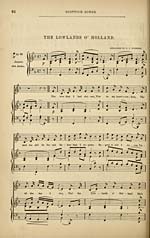 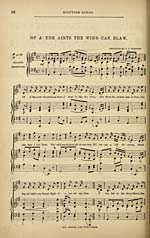 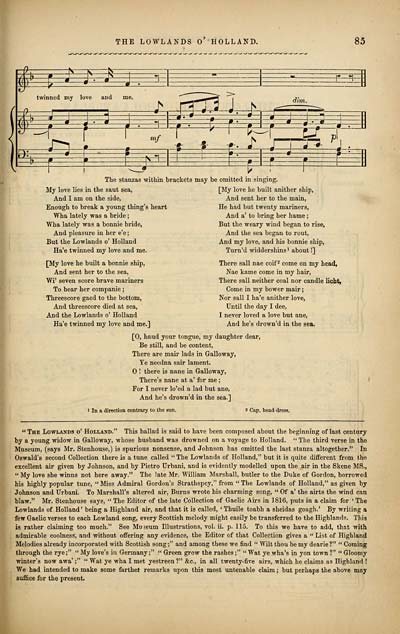 THE LOWLANDS HOLLAND.
85
The stanzas within brackets may be omitted in singing.
My love lies in the saut sea,
And I am on the side,
Enough to break a young thing's heart
Wha lately was a bride ;
Wha lately was a bonnie bride,
And pleasure in her e'e ;
But the Lowlands o' Holland
Ha'e twinned my love and me.
[My love he built anithcr ship,
And sent her to the main,
He had but twenty mariners,
And a' to bring her hame ;
But the weary wind began to rise,
And the sea began to rout,
And my love, and his bonnie ship,
Turn'd widdershins ' about !]
[My love he built a bonnie ship,
And sent her to the sea,
Wi' seven score brave mariners
To bear her companie ;
Threescore gaed to the bottom,
And threescore died at sea,
And the Lowlands o' Holland
Ha'e twinned my love and me.]
[0, haud your tongue, my daughter dear.
Be still, and be content,
There are mair lads in Galloway,
Ye needna sair lament.
! there is nane in Galloway,
There's nane at a' for me ;
For I never lo'ed a lad but ane,
And he's drown'd in the sea.]
There sail nae coif 2 come on my head,
Nae kame come in my hair,
There sail neither coal nor candle licht,
Come in my bower mair ;
Nor sail I ha'e anither love,
Until the day I dee,
I never loved a love but ane,
And he's drown'd in the sea.
i In a direction contrary to the Bun.
! Cap, head-dress.
" The Lowlands o' Holland." This ballad is said to have been composed about the beginning of last century
by a young widow in Galloway, whose husband was drowned on a voyage to Holland. " The third verse in the
Museum, (says Mr. Stenhouse,) is spurious nonsense, and Johnson has omitted the last stanza altogether." In
Oswald's second Collection there is a tune called "The Lowlands of Holland," but it is quite different from the
excellent air given by Johnson, and by Pietro Urbani, and is evidently modelled upon the air in the Skene MS.,
" My love she winns not here away." The late Mr. William Marshall, butler to the Duke of Gordon, borrowed
his highly popular tune, " Miss Admiral Gordon's Strathspey," from " The Lowlands of Holland," as given by
Johnson and Urbani. To Marshall's altered air, Burns wrote his charming song, " Of a' the airts the wind can
blaw." Mr. Stenhouse says, "The Editor of the late Collection of Gaelic Airs in 1816, puts in a claim for ' The
Lowlands of Holland' being a Highland air, and that it is called, ' Thuile toabh a sheidas goagh.' By writing a
few Gaelic verses to each Lowland song, every Scottish melody might easily be transferred to the Highlands. This
is rather claiming too much." See Museum Illustrations, vol. ii. p. 115. To this we have to add, that with
admirable coolness, and without offering any evidence, the Editor of that Collection gives a " List of Highland
Melodies already incorporated with Scottish song ;" and among these we find " Wilt thou be my dearie ?" " Coming
through the rye ;" " My love's in Germany ;" " Green grow the rashes ;" " Wat ye wha's in yon town ?" " Gloomy
winter's now awa' ;" " Wat ye wha I met yestreen ?" &c, in all twenty-five airs, which he claims as Highland !
We had intended to make some farther remarks upon this most untenable claim ; but perhaps the above may
suffice for the present.