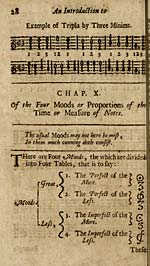 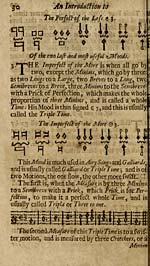 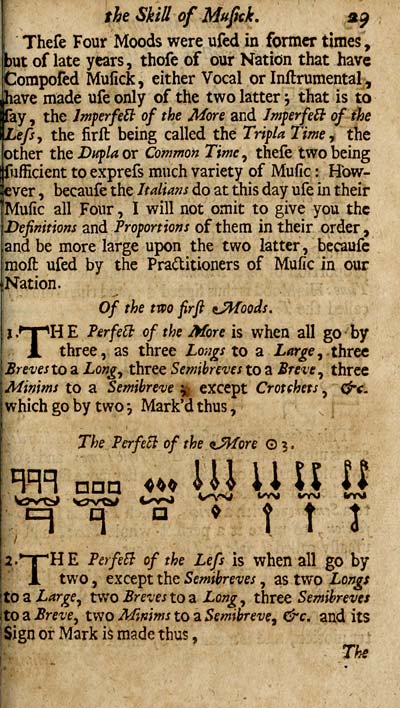 the Skill of Muftk, a$
Thefe Four Moods were ufed in former times ,
but of late years, thofe of our Nation that have
Compofed Mufick, either Vocal or Inftrumental ,
have made ufe only of the two latter ', that is to
fay , the Jmperfett of the More and Imperfett of the
Lefs, the firft being called the Tripla Time, the
pther the Dupla or Common Time, thefe two being
fiifficient to exprefs much variety of Mufic : How-
ever , becaufe the Italians do at this day ufe in their
Mufic all Four , I will not omit to give you the
Definitions and Proportions of them in their order ,
and be more large upon the two latter, becaufe
molt ufed by the Practitioners of Mufic in our
Nation.
Of the two firft zJWoods.
I .'T-*H E Perfett of the More is when all go by
JL three , as three Long s to a Large , three
Breves to a Long, three Semibreves to a Breve, three
Minims to a Semibreve fc except Crotchets , &c.
which go by two *, Mark'd thus ,
The PerfeB of the iWore Q 3 .
m aaa ♦♦♦ U] U U fj
2,'npH E Pcrfeft of the Lefs is when all go by
1 two , except the Semibreves , as two Longs
to a Large, two Breves to a Long , three Semibreves
to a Breve , two Minims to a Semibreve, &c. and its
Sign or Mark is made thus ,
The