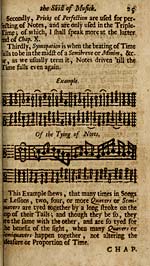 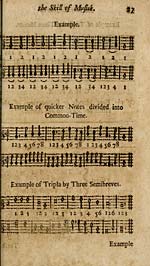 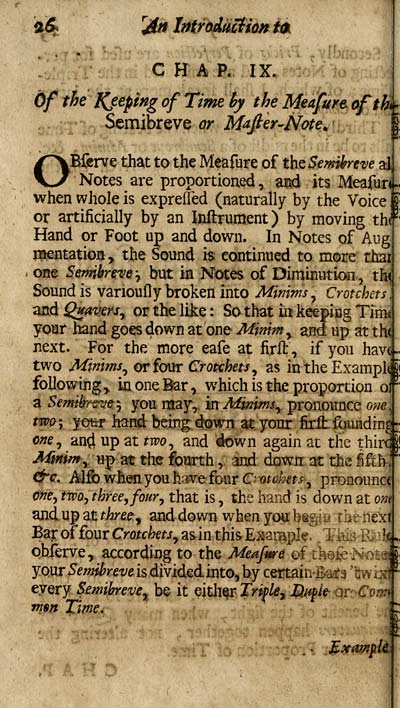 a& r Jin Intradkciion fa
CHAP. IX.
Of the Keeping of Time by the Meafura oftk-
Semibreve or Mofter-Note* •
OBferve that to the Meafure of the Semibreve al
Notes are proportioned, and its Meafun-
when whole is exprefled (naturally by the Voice
or artificially by an Inftrument) by moving th 1
Hand or Foot up and down. In Notes of Aug
mentation , the Sound is continued to more thai
one Semibreve, but in Notes of Diminution, th
Sound is varioufly broken into Minims , Crotchets,
and Quavers, or the like : So that in keepiug Tim<
your hand goes down at one Minim , and up at th<
next. For the more eafe at firft , if you hav^
two Minims, or four Crotchets, as intheExampli
following y in one Bar, which is the proportion o
a Semibrsve-, you may, in Minims, pronounce one
two; yoer hand being down at your firft founding j
one, and U P at two, and down again at the thirc j
Minim, up at the fourth , and down at the fifth]
&c. Alfbwhen you have four Crotchets, pronounce
one, two, three, four, that is , the hand is down at oni
and up at three , and down when you begin the nexi
Bar of four Crotchets, as in this Example,
obferve, according to the Mcafwe of t hot*,
your Semibreve is divided into, by certain Ban !
every Semibreve, be it either Triple, D.n\le or Com
mm Time.
. Example.