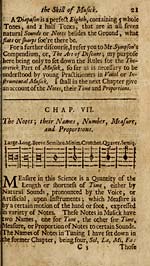 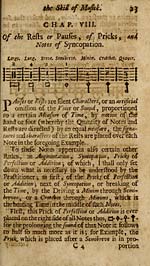 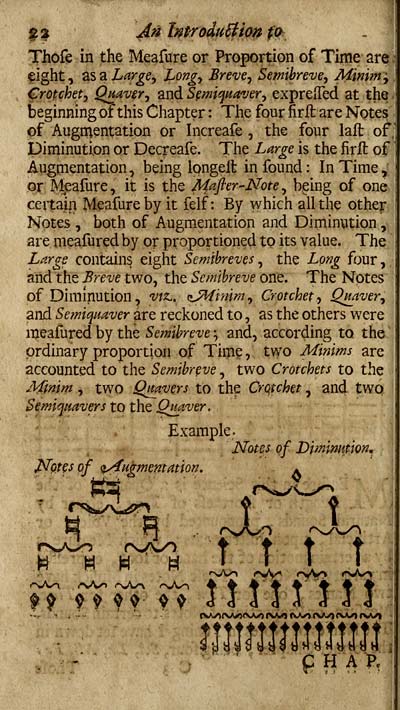 2 2 An IwProdu&im fa
Thofe in the Meafure or Proportion of Time are
eight, as a Large, Long, Breve, Semibreve, Minim ,
Crotchet, Quaver, and Semiquaver, exprelTed at the
beginning of this Chapter : The four firft are Notes
of Augmentation or Increafe , the four laft of'
Diminution or Decreafe. The Large is the firft of
Augmentation, being lpngeit in found : In Time,
or Meafure, it is the Mafier-Note , being of one
certain Meafure by it felf: By which all the other
Notes , both of Augmentation and Diminution ,
are meafured by or proportioned to its value. The
Large contains, eight Semibreves , the Long four,
and the Breve two, the Semibreve one. The Notes
of Diminution , viz.. zJMinim, Crotchet, Quaver,
and Semiquaver are reckoned to , as the others were
meafured by the Semibreve ; and, according to the
ordinary proportion of Time, two Minims are
accounted to the Semibreve , two Crotchets to the
Minim , two Quavers to the Crotchet , and two
Semiquavers to the Quaver.
Example.
Notes of Diminution.
Notes of Augmentation.
t$ $ $ W 9* ill}} III
mmwnimw..
- - f HA P.