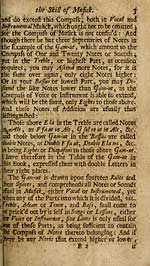 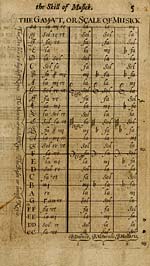 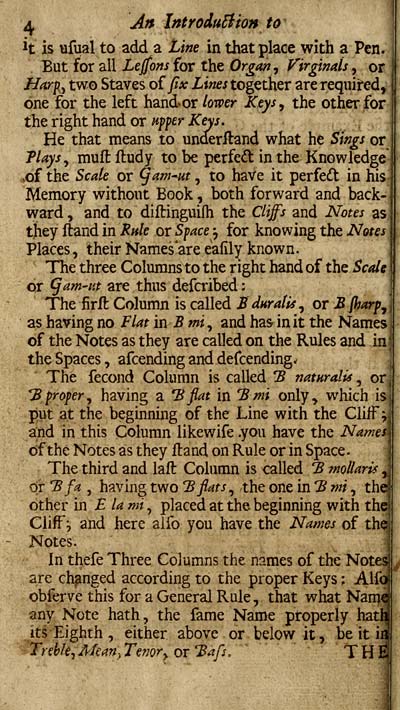 4 An Introduction to
it is ufual to add a Line in that place with a Pen.
But for all Lejfons for the Organ , Virginals , or
Narp y two Staves of /a: Xjwj together are required,
one for the left hand. or lower Keys, the other for
the right hand or upper Key.
He that means to underlland what he Sings or
flays , muft ftudy to be perfect in the Knowledge
of the Scale or (jam-ut , to have it perfect in his
Memory without Book , both forward and back
ward , and to diftinguifh the Cliffs and Notes as
they ftand in Rule or Space ; for knowing the Notes
Places, their Names are eafily known.
The three Columns to the right hand of the Scale
or (jam-tit are thus defcribed :
The firft Column is called B dwralis, or Bjharp y
as having no Flat in B mi, and has in it the Names
of the Notes as they are called on the Rules and in
the Spaces , afcending and defending*
The fecond Column is called B natwralU , or
B proper, having a B flat in B mi only, which is
put at the beginning of the Line with the Cliff
and in this Column likewife .you have the Name
of the Notes as they ftand on Rule or in Space.
The third and laft Column is called B mollaris
or B fa , having two B flats, the one in B mi , th
other in E la mi , placed at the beginning with the
Cliffy and here alfo you have the Names of the
Notes.
In thefe Three Columns the names of the Notes! ,.
are changed according to the proper Keys ; Alfo
obferve this for a General Rule, that what Name
any Note hath, the fame Name properly hath
its Eighth , either above or below it , be it if
Treble, Mean, Tenor y or Bafs. THE