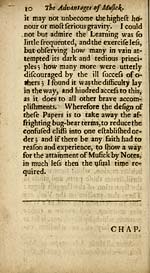 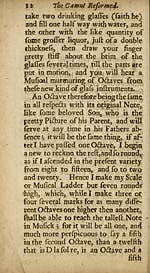 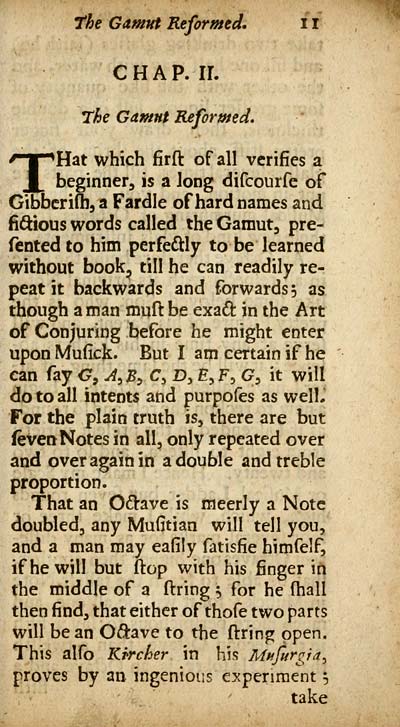 the Gamut Reformed, 1 1
CHAP. II.
the Gamut Reformed.
THat which firft of all verifies a
beginner, is a long difcourfe of
Gibberifh, a Fardle of hard names and
fictious words called the Gamut, pre-
fentedto him perfectly to be learned
without book, till he can readily re-
peat it backwards and forwards , as
though a man muft be exact in the Art
of Conjuring before he might enter
upon Mufick. But I am certain if he
can fay G 9 A^ B, C 3 D, £, F, G, it will
do to all intents and purpofes as well.
For the plain truth is, there are but
(even Notes in all, only repeated over
and over again in a double and treble
proportion.
That an Octave is meerly a Note
doubled, any Mufitian will tell you,
and a man may eafily fatisfie himfelf,
if he will but (top with his finger in
the middle of a (bring 5 for he (hall
then find, that either of thofe two parts
will bean Octave to the firing open.
This alfo Krrcher in his MttfurgU^
proves by an ingenious experiment 5
take