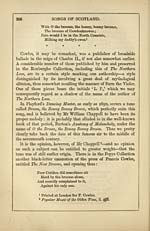 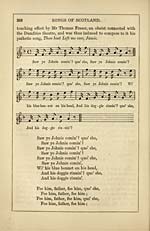 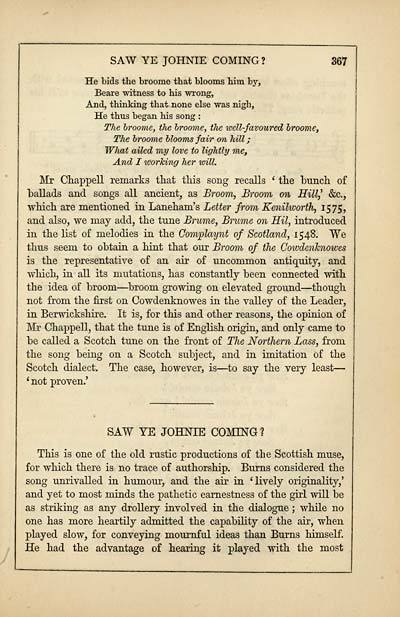 SAW YE JOHNIE COMING? 367
He bids the broome that blooms him by,
Beare witness to his wrong,
And, thinking that none else was nigh,
He thus began his song :
The broome, the broome, the well-favoured broome,
The broome blooms fair on hill;
What ailed my love to lightly me,
And I working her will.
Mr Chappell remarks that this song recalls ' the bunch of
ballads and songs all ancient, as Broom, Broom on Hill,' &c,
which are mentioned in Laneham's Letter from Kenilworth, 1575,
and also, we may add, the tune Brume, Brume on Hil, introduced
in the list of melodies in the Complaynt of Scotland, 1548. We
thus seem to obtain a hint that our Broom of the Cowdenhnowes
is the representative of an air of uncommon antiquity, and
which, in all its mutations, has constantly been connected with
the idea of broom — broom growing on elevated ground — though
not from the first on Cowdenhnowes in the valley of the Leader,
in Berwickshire. It is, for this and other reasons, the opinion of
Mr Chappell, that the tune is of English origin, and only came to
be called a Scotch tune on the front of The Northern Lass, from
the song being on a Scotch subject, and in imitation of the
Scotch dialect. The case, however, is — to say the very least —
' not proven.'
SAW YE JOBDSTIE COMTNG 1
This is one of the old rustic productions of the Scottish muse,
for which there is no trace of authorship. Burns considered the
song unrivalled in humour, and the air in 'lively originality,'
and yet to most minds the pathetic earnestness of the girl will be
as striking as any drollery involved in the dialogue ; while no
one has more heartily admitted the capability of the air, when
played slow, for conveying mournful ideas than Burns himself.
He had the advantage of hearing it played with the most