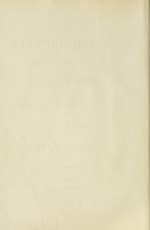 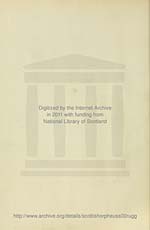 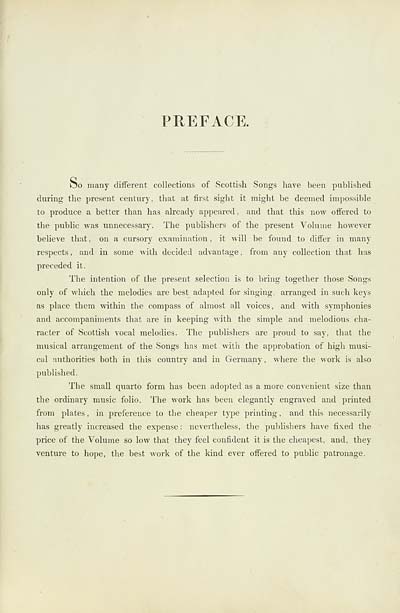 PREFACE.
!bo many different collections of Scottish Songs have been published
during the present century, that at first sight it might be deemed impossible
to produce a better than has already appeared , and that this now offered to
the public was unnecessary. The publishers of the present Volume however
believe that , on a cursory examination , it will be found to differ in many
respects , and in some with decided advantage , from any collection that has
preceded it.
The intention of the present selection is to bring together those Songs
only of which the melodies are best adapted for singing, arranged in such keys
as place them within the compass of almost all voices, and with symphonies
and accompaniments that are in keeping with the simple and melodious cha-
racter of Scottish vocal melodies. The publishers are proud to say, that the
musical arrangement of the Songs has met with the approbation of high musi-
cal authorities both in this country and in Germany, where the work is also
published.
The small quarto form has been adopted as a more convenient size than
the ordinary music folio. The work has been elegantly engraved and printed
from plates , in preference to the cheaper type printing , and this necessarily
has greatly increased the expense : nevertheless, the publishers have fixed the
price of the Volume so low that they feel confident it is the cheapest, and, they
venture to hope, the best work of the kind ever offered to public patronage.