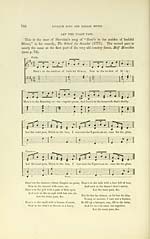 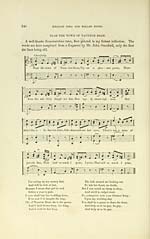 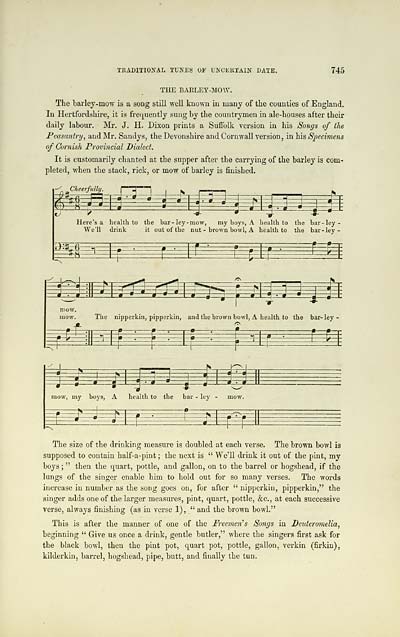 TRADITIONAL TUNES OF UNCERTAIN DATE.
745
THE BARLEY-MOW.
The barley-mow is a song still well known in many of the counties of England.
In Hertfordshire, it is frequently sung by the countrymen in ale-houses after their
daily labour. Mr. J. H. Dixon prints a Suffolk version in his Songs of the
Peasantry, and Mr. Sandys, the Devonshire and Cornwall version, in his Specimens
of Cornish Provincial Dialect.
It is customarily chanted at the supper after the carrying of the barley is com-
pleted, when the stack, rick, or mow of barley is finished.
Cheerfully.
«feSE^
=t
F= 1 •
3F
Here's a health to the har- ley-mow, my boys, A health to the bar- ley-
We'll drink it out of the nut - brown bowl, A health to the bar -ley-
^EE
mkm*gtm
-» — *-
mow. The nipperkin, pipperkin, and the brown bowl, A health to the bar- ley-
£
^>
m
i
*ZE=fc
mow, my boys, A health to the bar - ley - mow.
k
5
^
The size of the drinking measure is doubled at each verse. The brown bowl is
supposed to contain half-a-pint ; the next is " We'll drink it out of the pint, my
boys ; " then the quart, pottle, and gallon, on to the barrel or hogshead, if the
lungs of the singer enable him to hold out for so many verses. The words
increase in number as the song goes on, for after " nipperkin, pipperkin," the
singer adds one of the larger measures, pint, quart, pottle, &c, at each successive
verse, always finishing (as in verse 1), " and the brown bowl."
This is after the manner of one of the Freemen's Songs in Deuteromelia,
beginning " Give us once a drink, gentle butler," where the singers first ask for
the black bowl, then the pint pot, quart pot, pottle, gallon, verkin (firkin),
kilderkin, barrel, hogshead, pipe, butt, and finally the tun.