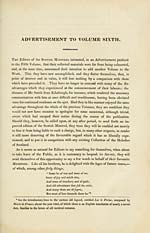 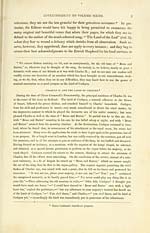 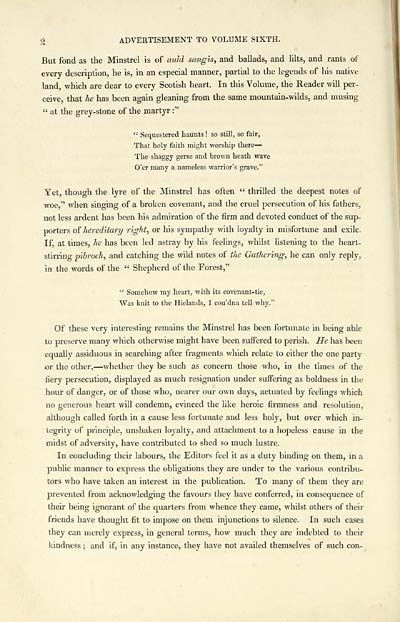 2 ADVERTISEMENT TO VOLUME SIXTH.
But fond as the Minstrel is of auld sangis, and ballads, and lilts, and rants of
every description, he is, in an especial manner, partial to the legends of his native
land, which are dear to every Scotish heart. In this Volume, the Reader will per-
ceive, that he has been again gleaning from the same mountain-wilds, and musing
" at the grey-stone of the martyr :"
" Sequestered haunts ! so still, so fair,
That holy faith might worship there —
The shaggy gerse and brown heath wave
O'er many a nameless warrior's grave."
Yet, though the lyre of the Minstrel has often " thrilled the deepest notes of
woe," when singing of a broken covenant, and the cruel persecution of his fathers,
not less ardent has been his admiration of the firm and devoted conduct of the sup-
porters of hereditary right, or his sympathy with loyalty in misfortune and exile.
If, at times, he has been led astray by his feelings, whilst listening to the heart-
stirring pibroch, and catching the wild notes of the Gathering, he can only reply,
in the words of the " Shepherd of the Forest,"
" Somehow my heart, with its covenant-tie,
Was knit to the Hielands, I cou'dna tell why."
Of these very interesting remains the Minstrel has been fortunate in being able
to preserve many which otherwise might have been suffered to perish. He has been
equally assiduous in searching after fragments which relate to either the one party
or the other, — whether they be such as concern those who, in the times of the
fiery persecution, displayed as much resignation under suffering as boldness in the
hour of danger, or of those who, nearer our own days, actuated by feelings which
no generous heart will condemn, evinced the like heroic firmness and resolution,
although called forth in a cause less fortunate and less holy, but over which in-
tegrity of principle, unshaken loyalty, and attachment to a hopeless cause in the
midst of adversity, have contributed to shed so much lustre.
In concluding their labours, the Editors feel it as a duty binding on them, in a
public manner to express the obligations they are under to the various contribu-
tors who have taken an interest in the publication. To many of them they are
prevented from acknowledging the favours they have conferred, in consequence of
their being ignorant of the quarters from whence they came, whilst others of their
friends have thought fit to impose on them injunctions to silence. In such cases
they can merely express, in general terms, how much they are indebted to their
kindness ; and if, in any instance, they have not availed themselves of such con-