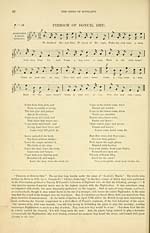 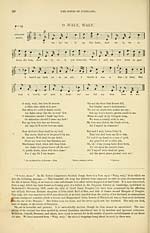 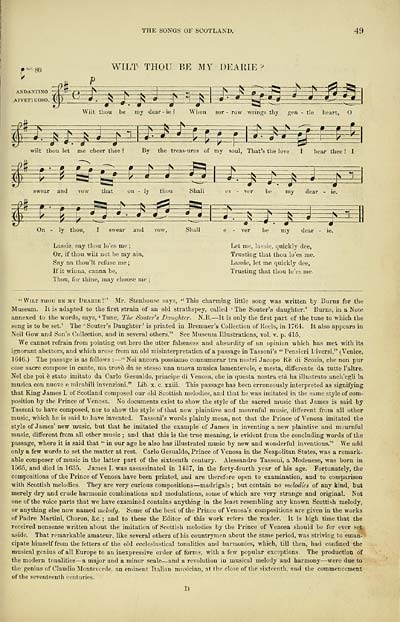 THE SONGS OF SCOTLAND.
49
AFFKT1UOSO.
WILT THOU BE MY DEARIE ?
^&=£
3
g-
Wilt thou be my dear - ie i When sor - row wrings thy gen - tie heart, O
^
I
fe^
$:
N- 2 *-
*t£
wilt thou let me cheer thee ?
By the treas-ures of my soul, That's the love I bear thee ! I
S^B
P — >— ^ — g a
-3 d a *—*
NS
{S=±
swear and vow that on - ly thou
Shall
be
my
dear
w
m^^s^m
B^^
S^
:!e=±
On - ly thou, I swear and vow,
Lassie, say thou lo'es me ;
Or, if thou wilt not be my ain,
Say na thou'lt refuse me ;
If it wiuna, canna be,
Thou, for thine, may choose me ;
Shall
be
my dear - ie.
Let me, lassie, quickly dee,
Trusting that thou lo'es me.
Lassie, let me quickly dee,
Trusting that thou lo'es me.
"Wilt thou be my Dearie?" Mr. Stenhouse says, "This charming little song was written by Burns for the
Museum. It is adapted to the first strain of an old strathspey, called ' The Souter's daughter.' Burns, in a Note
annexed to the words, says, ' Tune, The Souter's Daughter. N.B. — It is only the first part of the tune to which the
song is to be set.' The ' Souter's Daughter' is printed in Bremner's Collection of Reels, in 1764. It also appears in
Neil Gow and Son's Collection, and in several others." See Museum Illustrations, vol. v. p. 416.
We cannot refrain from pointing out here the utter falseness and absurdity of an opinion which has met with its
ignorant abettors, and which arose from an old misinterpretation of a passage in Tassoni's " Pensieri Liversi," (Venice,
1646.) The passage is as follows : — " Noi ancora possiamo connumerar tra nostri Jacopo life di Scozia, ehe non pur
cose sacre compose in canto, ma trovb da se stesso una nuova musica lamentevole, e mesta, differente da tutte 1'altre.
Nel che poi fe stato imitato da Carlo Gesualdo, principe di Venosa, ehe in questa nostra eta ha illustrato anch'egli la
musica con nuove e mirabili invenzioni." Lib. x. c. xxiii. This passage has been erroneously interpreted as signifying
that King James I. of Scotland composed our old Scottish melodies, and that he was imitated in the same style of com-
position by the Prince of Venosa. No documents exist to show the style of the sacred music that James is said by
Tassoni to have composed, nor to show the style of that new plaintive and mournful music, different from all other
music, which he is said to have invented. Tassoni's words plainly mean, not that the Prince of Venosa imitated the
style of James' new music, but that he imitated the example of James in inventing a new plaintive and mournful
music, different from all other music ; and that this is the true meaning, is evident from the concluding words of the
passage, where it is said that " in our age he also has illustrated music by new and wonderful inventions." We add
only a few words to set the matter at rest. Carlo Gesualdo, Prince of Venosa iu the Neapolitan States, was a remark-
able composer of music in the latter part of the sixteenth century. Alessandro Tassoni, a Modenese, was born in
1565, and died in 1635. James I. was assassinated in 1437, in the forty-fourth year of his age. Fortunately, the
compositions of the Prince of Venosa have been printed, and are therefore open to examination, and to comparison
with Scottish melodies. They are very curious compositions — madrigals ; but contain no melodies of any kind, but
merely dry and crude harmonic combinations and modulations, some of which are very strange and original. Not
one of the voice parts that we have examined contains anything in the least resembling any known Scottish melody,
or anything else now named melody. Some of the best of the Prince of Venosa' s compositions are given in the works
of Padre Martini, Choron, &c. ; and to these the Editor of this work refers the reader. It is high time that the
received nonsense written about the imitation of Scottish melodies by the Prince of Venosa should be for ever set
aside. That remarkable amateur, like several others of his countrymen about the same period, was striving to eman-
cipate himself from the fetters of the old ecclesiastical tonalities and harmonies, which, till then, had confined the
musical genius of all Europe to an inexpressive order of forms, with a few popular exceptions. The production of
the modern tonalities — a major and a minor scale — and a revolution in musical melody and harmony — were due to
the genius of Claudio Monteverde, an eminent Italian musician, at the close of the sixteenth, and the commencement
of the seventeenth centuries.
1)