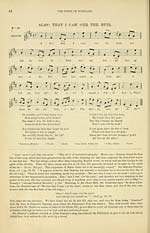 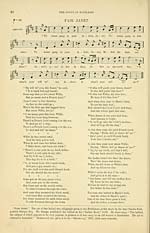 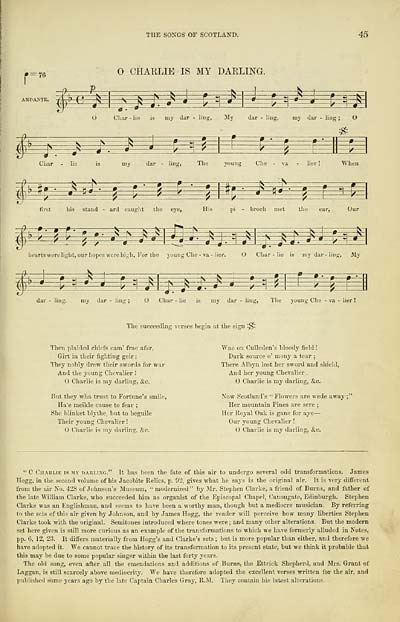 THE SONGS OF SCOTLAND.
45
r 7f
/\ yT
CHAELIE IS MY DARLING.
^ = E5^gfe £pJfc|^^ ^^EEESElB £
• ■ \4-
O Char - lie is my dar - ling, My dar - ling, my dar - ling ; O
m
^
— g-T"
Cliar
lie
my dar - ling, The young Che
lier !
When
Mf =z= ^^
^n^i
:*=£
^==n
-F — q-
first his stand - ard caught the eye, His pi - broch met the ear, Our
Q^^g^^iS^s^fe^^^
hearts were light, our hopes were high, h'or the young Che - va- lier. O Char - lie is my dar - ling, My
*
=£=§^=§=£1^:
*=8=
dar - ling. my dar - ling ; O Char - lie is my dar - ling, The young Che - va - lier !
Tbe succeeding verses begin at the sign :$:
Then plaided chiefs cam' frae afar,
Girt in their fighting geir ;
They nobly drew their swords for war
And the young Chevalier !
Charlie is my darling, &c.
But they wha trust to Fortune's smile,
Ha'e rueikle cause to fear ;
She blinket blythe, but to beguile
Their young Chevalier !
Charlie is my darling, &c.
Wae ou Culloden's bloody field !
Dark source o' mony a tear ;
There Albyn lost her sword and shield,
And her young Chevalier .
Charlie is my darling, &c.
Now Scotland's " Flowers are wede away ;
Her mountain Pines are sere ;
Her Royal Oak is gane for aye —
Our young Chevalier !
Charlie is my darling, &c.
" C Ciiablie is my darling." It has been the fate of this air to undergo several odd transformations. James
Hogg, in the second volume of his Jacobite Relics, p. 92, gives what he says is the original air. It is very different
from the air No. 428 of Johnson's Museum, " modernized" by Mr. Stephen Clarke, a friend of Burns, and father of
the late William Clarke, who succeeded him as organist of the Episcopal Chapel, Canongate, Edinburgh. Stephen
Clarke was an Englishman, and seems to have been a worthy man, though but a mediocre musician. By referring
to the sets of this air given by Johnson, and by James Hogg, the reader will perceive how many liberties Stephen
Clarke took with the original. Semitones introduced where tones were ; and many other alterations. But the modern
set here given is still more curious as an example of the transformations to which we have formerly alluded in Notes,
pp. 6, 12, 23. It differs materially from Hogg's and Clarke's sets ; but is more popular than either, and therefore we
have adopted it. We cannot trace the history of its transformation to its present state, but we think it probable that
this may be due to some popular singer within the last forty years.
The old song, even after all the emendations and additions of Burns, the Ettrick Shepherd, and Mrs. Grant of
Laggan, is still scarcely above mediocrity. We have therefore adopted the excellent verses written for the air, and
published some years ago by the late Captain Charles Gray, R.M. They contain his latest alterations.