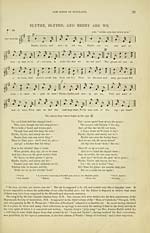 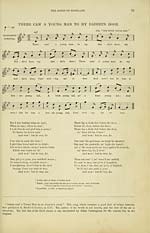 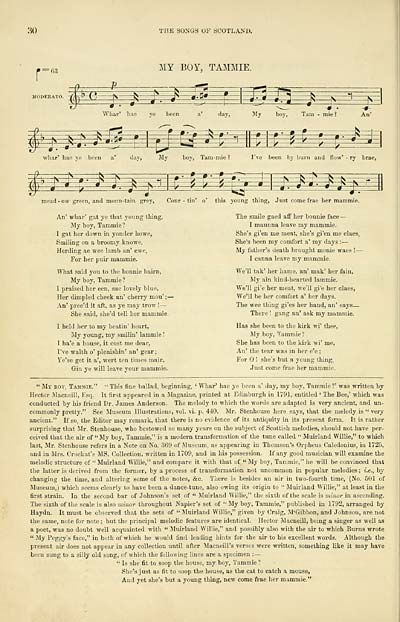 30
THE SONGS OF SCOTLAND.
' = 63
MODEEATO.
MY BOY, TAMMIE.
$^
-£L
jizif:
j~» J-
a
^
Whar 7 hae ye been
day,
My boy, Tarn - mie ?
g g ^F ^ Pi
See
An'
:pd^
E
^S
5*>
^
whar' hae ye been a' day, My boy, Tam-mie ?
I've been by burn and flow' - ry brae,
^
:*=£
S*
ii
=?E
^
/
T=t
g-jF
Cour - tin' o' this young thing, Just come frae her mammie.
The smile gaed aff her bonnie face —
I maunna leave my mammie.
She's gi'en me meat, she's gi'en me claes,
She's been my comfort a' my days : —
My father's death brought monie waes ! —
I canna leave my mammie.
We'll tak' her hame, an' mak' her fain.
My ain kind-hearted lammie.
We'll gi'e her meat, we'll gi'e her claes,
We'll be her comfort a' her days.
The wee thing gi'es her hand, an' says —
There ! gang an' ask my mammie.
Has she been to the kirk wi' thee,
My boy, Tammie ?
She has been to the kirk wi' me,
An' the tear was in her e'e ;
For ! she's but a young thing,
Just come frae her mammie.
*J -0-
mead-ow green, and moun-tain grey,
An' whar' gat ye that young thing,
My boy, Tammie ?
I gat her down in yonder howe,
Smiling on a broomy knowe,
Herding ae wee lamb an' ewe,
For her purr mammie.
What said you to the bonnie bairn,
My boy, Tammie?
I praised her een, sae lovely blue,
Her dimpled cheek an' cherry mou' ;-
An' pree'd it aft, as ye may trow ! —
She said, she'd tell her mammie.
I held her to my beatin' heart,
My young, my smilin' lammie !
I ha'e a house, it cost me dear,
I've walth o' plenishin' an' gear;
Ye'se get it a', wert ten times mair.
Gin ye will leave your mammie.
" My boy, Tammie." " This fine ballad, beginning, ' Whar' hae ye been a' day, my boy, Tammie?' was written by
Hector Macneill, Esq. It first appeared in a Magazine, printed at Edinburgh in 1791, entitled ' The Bee,' which was
conducted by his friend Dr. James Anderson. The melody to which the words are adapted is very ancient, and un-
commonly pretty." See Museum Illustrations, vol. vi. p. 440. Mr. Stenhouse here says, that the melody is " very
ancient." If so, the Editor may remark, that there is no evidence of its antiquity in its present form. It is rather
surprising that Mr. Stenhouse, who bestowed so many years on the subject of Scottish melodies, should not have per-
ceived that the air of " My boy, Tammie," is a modern transformation of the tune called " Muirland Willie," to which
last, Mr. Stenhouse refers in a Note on No. 369 of Museum, as appearing in Thomson's Orpheus Caledonius, in 1725,
and in Mrs. Crockat's MS. Collection, written in 1709, and in lus possession. If any good musician will examine the
melodic structure of " Muirland Willie," and compare it with that of " My boy, Tammie," he will be convinced that
the latter is derived from the former, by a process of transformation not uncommon in popular melodies ; i.e., by
changing the time, and altering some of the notes, &c. There is besides an air in two-fourth time, (No. 501 of
Museum,) which seems clearly to have been a dance-tune, also owing its origin to " Muirland Willie," at least in the
first strain. In the second bar of Johnson's set of " Muirland Willie," the sixth of the scale is minor in ascending.
The sixth of the scale is also minor throughout Napier's set of " My boy, Tammie," published in 1792, arranged by
Haydn. It must be observed that the sets of " Muirland Willie," given by Craig, M'Gibbon, and Johnson, are not
the same, note for note ; but the principal melodic features are identical. Hector Macneill, being a singer as well as
a poet, was no doubt well acquainted with " Muirland Willie," aud possibly also with the air to which Burns wrote
" My Peggy's face," in both of which he would find leading hints for the air to his excellent words. Although the
present air does not appear in any collection until after Macneill's verses were written, something like it may have
been sung to a silly old song, of which the following lines are a specimen : —
" Is she fit to soop the house, my boy, Tammie ?
She's just as fit to soop the house, as the cat to catch a mouse,
Aud yet she's but a young thing, new come frae her mammie."