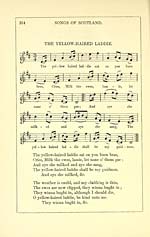 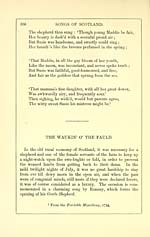 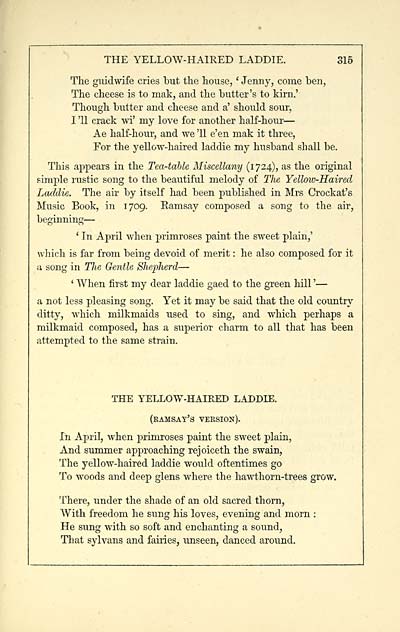 THE YELLOW-HAIRED LADDIE. 315
The guidwife cries but the house, ' Jenny, come ben,
The cheese is to mak, and the butter's to kirn.'
Though butter and cheese and a' should sour,
I '11 crack wi' my love for another half-hour —
Ae half-hour, and we '11 e'en mak it three,
For the yellow-haired laddie my husband shall be.
This appears in the Tea-table Miscellany (1724), as the original
simple rustic song to the beautiful melody of The Yellow-Haired
Laddie. The air by itself had been published in Mrs Crockat's
Music Book, in 1709. Eamsay composed a song to the air,
beginning —
' In April when primroses paint the sweet plain,'
which is far from being devoid of merit : he also composed for it
a song in The Gentle Shepherd —
' When first my dear laddie gaed to the green hill ' —
a not less pleasing song. Yet it may be said that the old country
ditty, which milkmaids used to sing, and which perhaps a
milkmaid composed, has a superior charm to all that has been
attempted to the same strain.
THE YELLOW-HAIRED LADDIE.
(ramsay's version).
Tn April, when primroses paint the sweet plain,
And summer approaching rejoiceth the swain,
The yellow-haired laddie would oftentimes go
To woods and deep glens where the hawthorn-trees grow.
There, under the shade of an old sacred thorn,
With freedom he sung his loves, evening and morn :
He sung with so soft and enchanting a sound,
That sylvans and fairies, unseen, danced around.