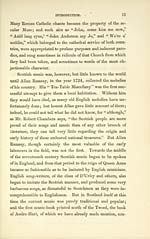 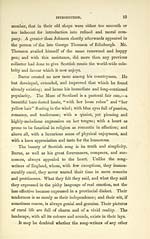 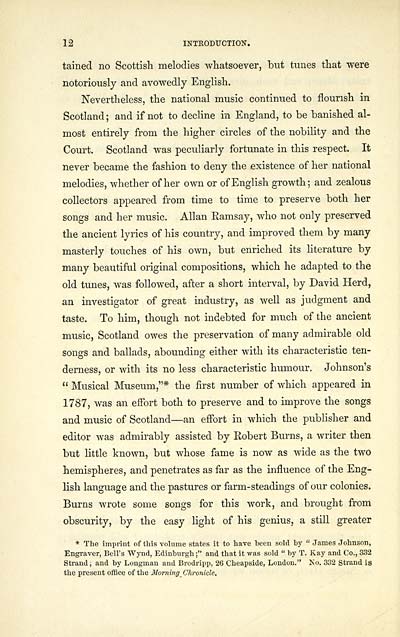 12 INTRODUCTION.
tained no Scottisli melodies whatsoever, but tunes tliat were
notoriously and avowedly English.
Nevertheless, the national music continued to flourish in
Scotland ; and if not to decline in England, to be banished al-
most entirely from the higher circles of the nobility and the
Court. Scotland was peculiarly fortunate in this respect. It
never became the fashion to deny the existence of her national
melodies, whether of her own or of English growth; and zealous
collectors appeared from time to time to preserve both her
songs and her music. Allan Eamsay, who not only preserved
the ancient lyrics of his country, and improved them by many
masterly touches of his own, but enriched its Hterature by
many beautiful original compositions, which he adapted to the
old tunes, was followed, after a short interval, by David Herd,
an investigator of great industry, as well as judgment and
taste. To him, though not indebted for much of the ancient
music, Scotland owes the preservation of many admirable old
songs and ballads, abounding either with its characteristic ten-
derness, or with its no less characteristic humour. Johnson's
" Musical Museum,"* the first number of which appeared in
1787, was an effort both to preserve and to improve the songs
and music of Scotland — an effort in which the publisher and
editor Avas admirably assisted by Eobert Burns, a writer then
but little known, but whose fame is now as wide as the two
hemispheres, and penetrates as far as the influence of the Eng-
lish language and the pastures or farm- steadings of our colonies.
Burns wrote some songs for this work, and brought from
obscurity, by the easy light of his genius, a still greater
* The imprint of this volume states it to have been sold by " James Johnson,
Engraver, Bell's Wynd, Edinburgh ;" and that it was sold " by T. Kay and Co., 332
Strand J and by Longman and Brodripp, 26 Cheapside, London." Ko. 332 Strand is
the present office of the Morning Chronicle.