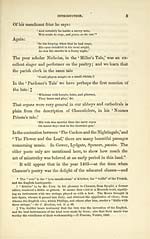 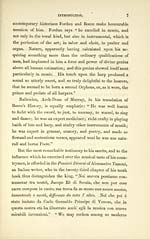 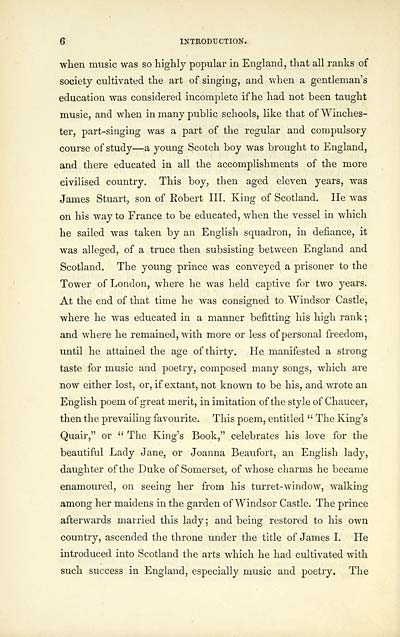 6 INTRODUCTION.
when music was so highly popular in England, that all ranks of
society cultivated the art of singing, and when a gentleman's
education was considered incomplete if he had not been taught
music, and when in many public schools, like that of Winches-
ter, part-singing was a part of the regular and compulsory
course of study — a young Scotch boy was brought to England,
and there educated in all the accomplishments of the more
civilised country. This boy, then aged eleven years, was
James Stuart, son of Eobert III. King of Scotland. He was
on his way to France to be educated, when the vessel in which
he sailed was taken by an English squadron, in defiance, it
was alleged, of a truce then subsisting between England and
Scotland. The young prince was conveyed a prisoner to the
Tower of London, where he was held captive for two years.
At the end of that time he was consigned to Windsor Castle,
where he was educated in a manner befitting his high rank ;
and where he remained, with more or less of personal freedom,
until he attained the age of thirty. He manifested a strong
taste for music and poetry, composed many songs, which are
now either lost, or, if extant, not known to be his, and wrote an
English poem of great merit, in imitation of the style of Chaucer,
then the prevailing favourite. This poem, entitled " The King's
Quair," or " The King's Book," celebrates his love for the
beautiful Lady Jane, or Joanna Beaufort, an English lady,
daughter of the Duke of Somerset, of whose charms he became
enamoured, on seeing her from his turret-window, walking
among her maidens in the garden of Windsor Castle. The prince
afterAvards married this lady; and being restored to his own
country, ascended the throne imder the title of James I. He
introduced into Scotland the arts which he had cultivated with
such success in England, especially music and poetry. The