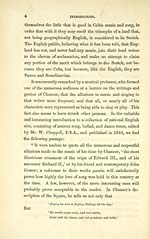 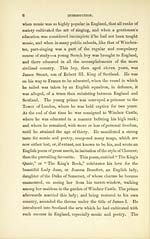 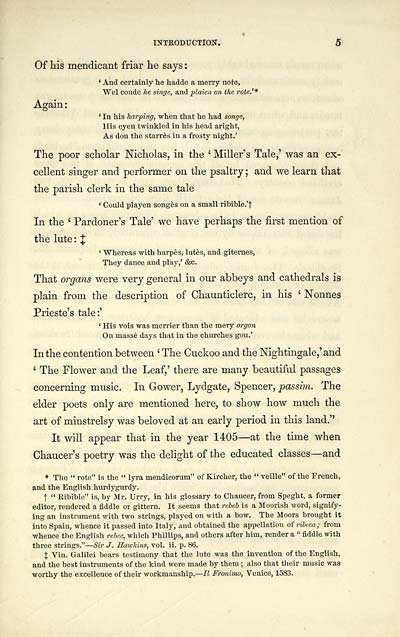 TNTUODUCTION.
Of his mendicant friar he says :
Again :
And certainly lie hadde a merry note,
Wei coude he singe, and plaien on the rote.'
* In his harping, -when that he had songe.
His eyen twinkled in his head aright,
As don the starr&s in a frosty night.'
The poor scholar Nicholas, in the '• Miller's Tale,' was an ex-
cellent singer and performer on the psaltry ; and we learn tliat
the parish clerk in the same tale
' Could playen songes on a small rihible.'t
In the ' Pardoner's Tale' we have perhaps the first mention of
the lute : %
' Whereas with harpes, lutSs, and giternes,
They dance and play,' &c.
That organs were very general in our abbeys and cathedrals is
plain from the description of Chaunticlerc, in his ' Nonnes
Prieste's tale:'
' His vois was merrier than the mery organ
On masse days that in the churches gon.'
In the contention between ' The Cuckoo and the Nightingale,' and
' The Flower and the Leaf,' there are many beautiful passages
concerning music. In Gower, Lydgate, Spencer, passim. The
elder poets only are mentioned here, to show how much the
art of minstrelsy was beloved at an early period in this land."
It will appear that in the year 1405 — at the time when
Chaucer's poetry was the delight of the educated classes — and
* The " rote" is the " lyra mendicorum" of Kircher, the " veille" of the French,
and the English hurdygurdy.
t " Ribible" is, by Mr. Urry, in his glossary to Chaucer, from Speght, a former
editor, rendered a fiddle or gittern. It seems that rebeb is a Moorish word, signify-
ing an instrument with two strings, played on with a bow. The Moors brought it
into Spain, whence it passed into Italy, and obtained the appellation oiribeca; from
whence the English rebec, which Phillips, and others after him, render a " fiddle with
three strings."— /S'ir J. Hawkins, vol. ii. p. 86.
% Vin. Galilei bears testimony that the lute was the invention of the English,
and the best instruments of the kind were made by them ; also that their music was
worthy the excellence of their workmanship.— IZ Fronimo, Venice, 1583.