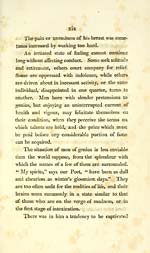 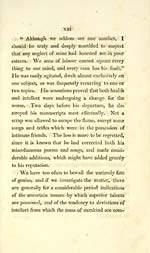 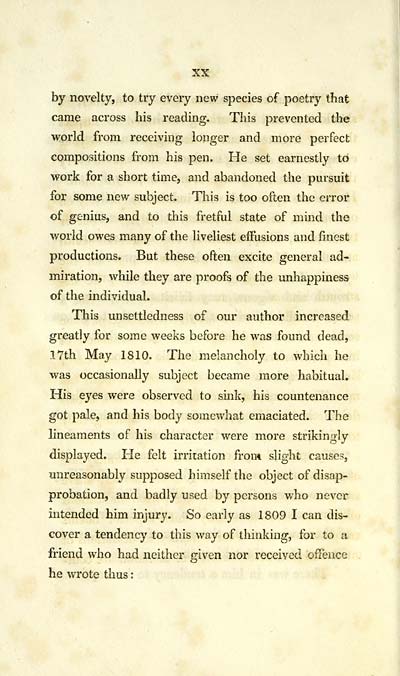 XX
by novelty, to try every new species of poetry that
came across his reading. This prevented the
world from receiving longer and more perfect
compositions from his pen. He set earnestly to
work for a short time, and abandoned the pursuit
for some new subject. This is too often the error
of genius, and to this fretful state of mind the
world owes many of the liveliest effusions and finest
productions. But these often excite general ad-
miration, while they are proofs of the unhappiness
of the individual.
This unsettledness of our author increased
greatly for some weeks before he was found dead,
17th May 1810. The melancholy to which he
was occasionally subject became more habitual.
His eyes were observed to sink, his countenance
got pale, and his body somewhat emaciated. The
lineaments of his character were more strikingly
displayed. He felt irritation from slight causes,
unreasonably supposed himself the object of disap-
probation, and badly used by persons who never
intended him injury. So early as 1809 I can dis-
cover a tendency to this way of thinking, for to a
friend who had neither given nor received offence
he wrote thus :