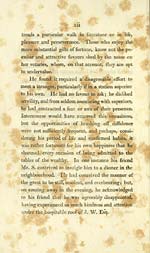 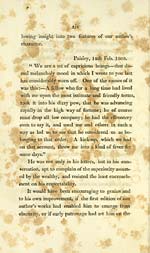 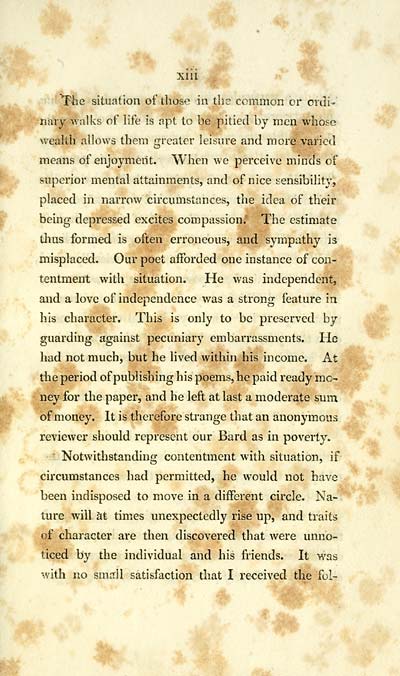 XI 11
The situation of those in the common or ordi-
nary walks of life is apt to be pitied by men whose
wealth allows them greater leisure and more varied
means of enjoyment. When we perceive minds of
superior mental attainments, and of nice sensibility,
placed in narrow circumstances, the idea of their
being depressed excites compassion. The estimate
thus formed is often erroneous, and sympathy is
misplaced. Our poet afforded one instance of con-
tentment with situation. He was independent,
and a love of independence was a strong feature in
his character. This is only to be preserved by
guarding against pecuniary embarrassments. He
had not much, but he lived within his income. At
the period of publishing his poems, he paid ready mo-
ney for the paper, and he left at last a moderate sum
of money. It is therefore strange that an anonymous
reviewer should represent our Bard as in poverty.
i Notwithstanding contentment with situation, if
circumstances had permitted, he would not have
been indisposed to move in a different circle. Na-
ture will at times unexpectedly rise up, and traits
of character are then discovered that were unno-
ticed by the individual and his friends. It was
with no small satisfaction that I received the fol-