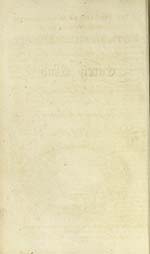 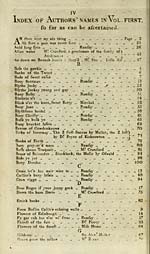 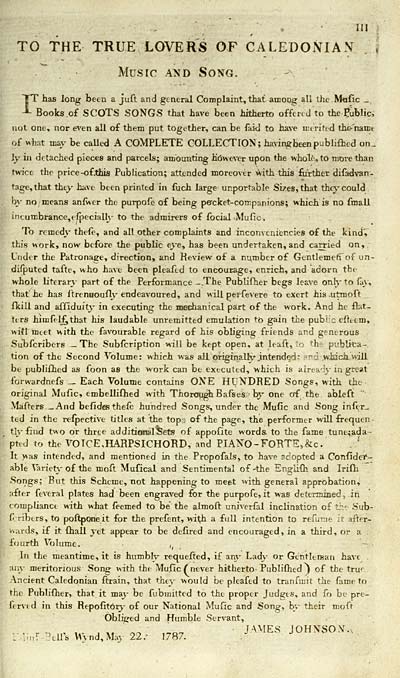 ' III
TO THE TRUE LOVERS OF CALEDONIAN .'. ,
Musrc and Song.
r % has long been a juft and general Complaint, that among all the Mafic _
Books .of SCOTS SONGS that have been hitherto offers d to the Public,
not one, nor even all of them put together, can be faid to have merited the-'namt
of what may be called A COMPLETE COLLECTION; having been publifhed on-
ly in detached pieces and parcels; amounting however upon the whole, to more than
twice the price -of.this Publication; attended moreover with this further difadvan-
tage,that they have been printed in fuch large unportable Sizes, that they could
by no means anfwer the purpofe of being percket-companions; which is no fmall
incumbrance^ fpecially to the admirers of focial Mufic.
To remedy thefe, and all other complaints and inconvenier.cies of the kind",
this work, now before the public eye, has been undertaken, and carried on, .
Under the Patronage, direction, and Review of a number of Gentlemeff of un-
difputed tafte, who have been pleafed to encourage, enrich, and adorn the
whole literary part of the Performance -.The Publisher begs leave only to fay,
that' he has ftrenuoufly endeavoured, and will perfevere to exert his utmoft
fkill and affiduity in executing the mechanical part of the work. And he flat-
ters him felfj that his laudable unremitted emulation to gain the pub' c eftiem,
wilt meet with the favourable regard of his obliging friends and generous
Subfcribers — The Subfcription will be kept open, at leaft, to th publica-
tion of the Second Volume: which was all originally .intended ; a rj which will
be publifhed as foon as the work can be executed, which is already in great
forwardnefs — Each Volume contains ONE HUNDRED Songs, with the
original Mufic, embellifhed with Thorough B a fses - by one of .the ableft
Mafters -And befides thefe hundred Songs, under the Mufic and Song infer-
ted in the refpective titles at the top : of the page, the performer will frequen
tly find two or three additional Sets of appofite words, to the fame tune; ada-
pted to the VOICE, HARPSICHORD, and PIANO- FORTE, &c.
It was intended, and mentioned in the Propofals, to have adopted a Confidcrj-
able Variety of the moft Mufical and Sentimental of -the Englifh and Irifh
Songs; But this Scheme, not happening to meet with general approbation,
after feveral plates had been engraved for the purpofe, it was determined, in
compliance with what feemed to be the almoft univerfal inclination of the Sub-
fcribers, to poftponeit for the prefent, wil£ a full intention to refume it after-
vvards, if it fhall yet appear to be defired and encouraged, in a third, or a .
fourth Volume. , -
In the meantime, it is humbly requested, if any Lady or Gentleman have .
any meritorious Song with the Mufic (never hitherto- Publifhed ^ of the tru<-
Ancient Caledonian ftrain, that they would be pleafed to tranftnit the fame to
the Publifher, that it may be fubmittc-d to the proper Judges, and fo be pre-
ferred in this Repository of our National Mufic and Song, by their moft
Obliged and Humble Servant,
Y m.r.B^ UVnd.Ma, 22, ,787. ' ' JAMES JOHNSON'.,