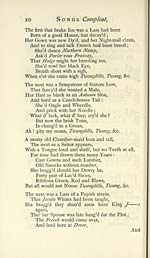 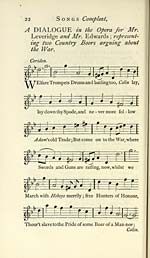 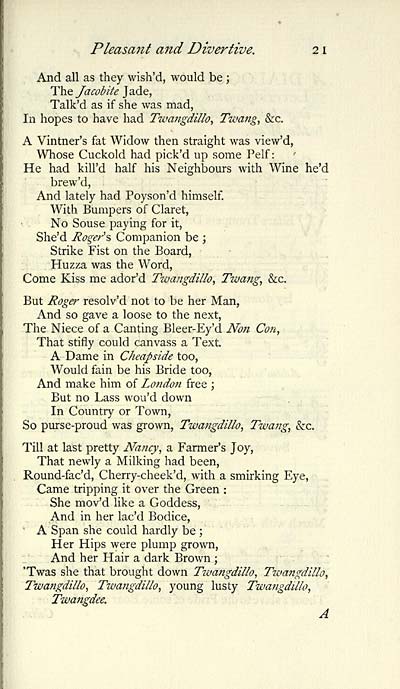 Pleasant and Diver live. 2 1
And all as they wish'd, would be ;
The Jacobite Jade,
Talk'd as if she was mad,
In hopes to have had Twangdillo, Twang, &c.
A Vintner's fat Widow then straight was view'd,
Whose Cuckold had pick'd up some Pelf :
He had kill'd half his Neighbours with Wine he'd
brew'd,
And lately had Poyson'd himself.
With Bumpers of Claret,
No Souse paying for it,
She'd Roger's Companion be ;
Strike Fist on the Board,
Huzza was the Word,
Come Kiss me ador'd Twangdillo, Twang, &c.
But Roger resolv'd not to be her Man,
And so gave a loose to the next,
The Niece of a Canting Bleer-Ey'd No?i Con,
That stifly could canvass a Text.
A Dame in Cheapside too,
Would fain be his Bride too,
And make him of London free ;
But no Lass wou'd down
In Country or Town,
So purse-proud was grown, Twangdillo, Twang, &c.
Till at last pretty Nancy, a Farmer's Joy,
That newly a Milking had been,
Round-fac'd, Cherry-cheek'd, with a smirking Eye,
Came tripping it over the Green :
She mov'd like a Goddess,
And in her lac'd Bodice,
'' A Span she could hardly be ;
Her Hips were plump grown,
And her Hair a dark Brown ;
'Twas she that brought down Twangdillo, Twangdillo,
Twangdillo, Twangdillo, young lusty Twangdillo \
Twangdee.
A