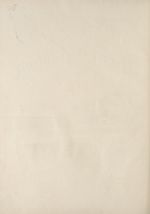 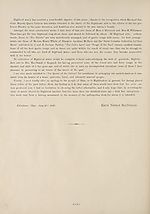 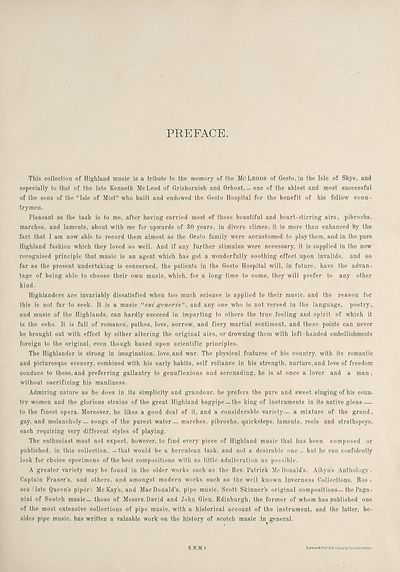 PREFACE.
This collection of Highland music is a tribute to the memory of the McLeods of Gesto, in the Isle of Skye, and
especially to that of the late Kenneth McLeod of Grishornish and Orbost,—one of the ablest and most successful
of the sons of the “Isle of Mist” who built and endowed the Gesto Hospital for the benefit of his fellow coun¬
trymen.
Pleasant as the task is to me, after having carried most of these beautiful and heart-stirring airs, pibrochs,
marches, and laments, about with me for upwards of 30 years, in divers climes, it is more than enhanced hy the
fact that I am now able to record them almost as the Gesto family were accustomed to play them, and in the pure
Highland fashion which they loved so well. And if any further stimulus were necessary, it is supplied in the now
recognised principle that music is an agent which has got a wonderfully soothing effect upon invalids, and so
far as the present undertaking is concerned, the patients in the Gesto Hospital will, in future, have the advan¬
tage of being able to choose their own music, which, for a long time to come, they will prefer to any other
kind.
Highlanders are invariably dissatisfied when too much science is applied to their music, and the reason for
this is not far to seek. It is a music “sui generis”, and any one who is not versed in the language, poetry,
and music of the Highlands, can hardly succeed in imparting to others the true feeling and spirit of which it
is the echo. It is full of romance, pathos, love, sorrow, and fiery martial sentiment, and these points can never
be brought out with effect by either altering the original airs, or drowning them with left-handed embellishments
foreign to the original, even though based upon scientific principles.
The Highlander is strong in imagination, love, and war. The physical features of his country, with its romantic
and picturesque scenery, combined with his early habits, self reliance in his strength, nurture, and love of freedom
conduce to these, and preferring gallantry to genuflexions and serenading, he is at once a lover and a man,
without sacrificing his manliness.
Admiring nature as he does in its simplicity and grandeur, he prefers the pure and sweet singing of his coun¬
try women and the glorious strains of the great Highland bagpipe— the king of instruments in its native glens —
to the finest opera. Moreover, he likes a good deal of it, and a considerable variety— a mixture of the grand,
gay, and melancholy— songs of the purest water — marches, pibrochs, quicksteps, laments, reels and strathspeys,
each requiring very different styles of playing.
The enthusiast must not expect, however, to find every piece of Highland music that has been composed or
published, in this collection, —that would be a herculean task, and not a desirable one — but he can confidently
look for choice specimens of the best compositions with as little adulteration as possible.
A greater variety may be found in the older works such as the Rev. Patrick McDonald’s. Albyn's Anthology,
Captain Fraser’s, and others, and amongst modern works such as the well known Inverness Collections, Ros -
ses (late Queen’s piper) McKay’s, and MacDonald’s, pipe music, Scott Skinner’s original compositions—the Paga¬
nini of Scotch music— those of Messrs. David and John Glen, Edinburgh, the former of whom has published one
of the most extensive collections of pipe music, with a historical account of the instrument, and the latter, be¬
sides pipe music, has written a valuable work on the history of scotch music in^ general.
K N.M.l
Engraved A;Printed at Leipzig by CsGa
r
'Branc'stetter.