Series 3 > Charters of the Abbey of Inchcolm 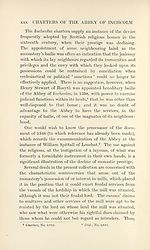 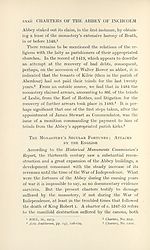 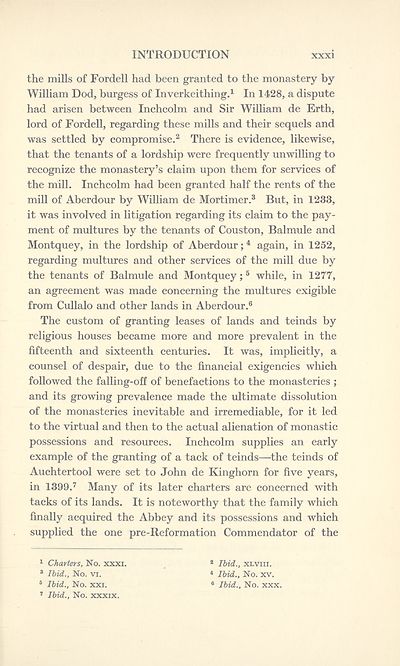 INTRODUCTION
XXXI
the mills of Fordell had been granted to the monastery by
William Dod, burgess of Inverkeithing.1 In 1428, a dispute
had arisen between Inchcolm and Sir William de Erth,
lord of Fordell, regarding these mills and their sequels and
was settled by compromise.2 There is evidence, likewise,
that the tenants of a lordship were frequently unwilling to
recognize the monastery’s claim upon them for services of
the mill. Inchcolm had been granted half the rents of the
mill of Aberdour by William de Mortimer.3 But, in 1233,
it was involved in litigation regarding its claim to the pay¬
ment of multures by the tenants of Couston, Balmule and
Montquey, in the lordship of Aberdour;4 again, in 1252,
regarding multures and other services of the mill due by
the tenants of Balmule and Montquey;5 while, in 1277,
an agreement was made concerning the multures exigible
from Cullalo and other lands in Aberdour.6
The custom of granting leases of lands and teinds by
religious houses became more and more prevalent in the
fifteenth and sixteenth centuries. It was, implicitly, a
counsel of despair, due to the financial exigencies which
followed the falling-off of benefactions to the monasteries ;
and its growing prevalence made the ultimate dissolution
of the monasteries inevitable and irremediable, for it led
to the virtual and then to the actual alienation of monastic
possessions and resources. Inchcolm supplies an early
example of the granting of a tack of teinds—the teinds of
Auchtertool were set to John de Kinghorn for five years,
in 1399.7 Many of its later charters are concerned with
tacks of its lands. It is noteworthy that the family which
finally acquired the Abbey and its possessions and which
supplied the one pre-Reformation Commendator of the
1 Charters, No. xxxi. 2 Ibid., xlviii.
8 Ibid., No. vi. 4 Ibid., No. xv.
5 Ibid., No. xxi. 6 Ibid., No. xxx.
7 Ibid., No. xxxix.