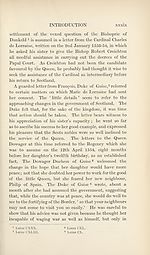 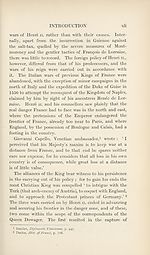 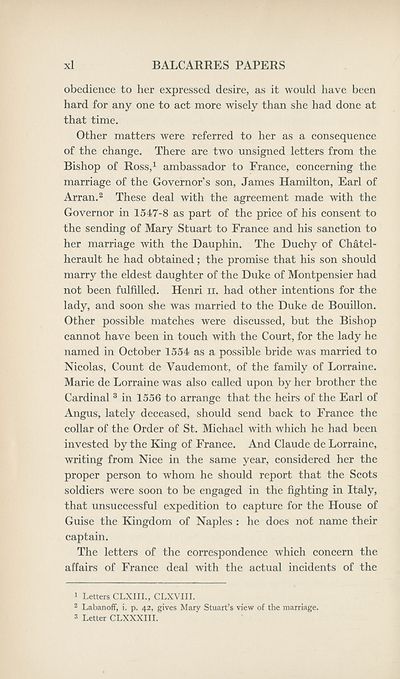 xl
BALCARRES PAPERS
obedience to her expressed desire, as it would have been
hard for any one to act more wisely than she had done at
that time.
Other matters were referred to her as a consequence
of the change. There are two unsigned letters from the
Bishop of Ross,1 ambassador to France, concerning the
marriage of the Governor’s son, James Hamilton, Earl of
Arran.2 These deal with the agreement made with the
Governor in 1547-8 as part of the price of his consent to
the sending of Mary Stuart to France and his sanction to
her marriage with the Dauphin. The Duchy of Chatel-
herault he had obtained; the promise that his son should
marry the eldest daughter of the Duke of Montpensier had
not been fulfilled. Henri n. had other intentions for the
lady, and soon she was married to the Duke de Bouillon.
Other possible matches were discussed, but the Bishop
cannot have been in touch with the Court, for the lady he
named in October 1554 as a possible bride was married to
Nicolas, Count de Vaudemont, of the family of Lorraine.
Marie de Lorraine was also called upon by her brother the
Cardinal 3 in 1556 to arrange that the heirs of the Earl of
Angus, lately deceased, should send back to France the
collar of the Order of St. Michael with which he had been
invested by the King of France. And Claude de Lorraine,
writing from Nice in the same year, considered her the
proper person to whom he should report that the Scots
soldiers were soon to be engaged in the fighting in Italy,
that unsuccessful expedition to capture for the House of
Guise the Kingdom of Naples : he does not name their
captain.
The letters of the correspondence which concern the
affairs of France deal with the actual incidents of the
1 Letters CLXIIL, CLXVIII.
2 Labanoff, i. p. 42, gives Mary Stuart’s view of the marriage.
3 Letter CLXXXIII.