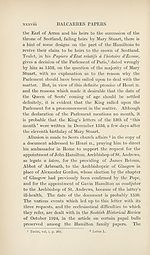 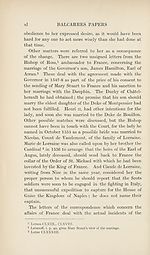 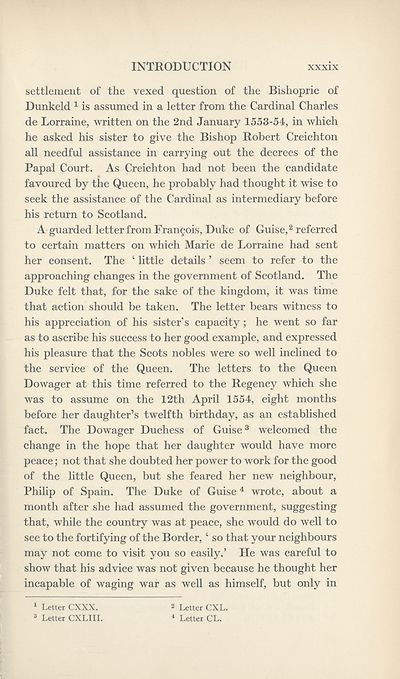 INTRODUCTION
XXXIX
settlement of the vexed question of the Bishopric of
Dunkeld 1 is assumed in a letter from the Cardinal Charles
de Lorraine, written on the 2nd January 1553-54, in which
he asked his sister to give the Bishop Robert Creichton
all needful assistance in carrying out the decrees of the
Papal Court. As Creichton had not been the candidate
favoured by the Queen, he probably had thought it wise to
seek the assistance of the Cardinal as intermediary before
his return to Scotland.
A guarded letter from Francois, Duke of Guise,2 referred
to certain matters on which Marie de Lorraine had sent
her consent. The ‘ little details ’ seem to refer to the
approaching changes in the government of Scotland. The
Duke felt that, for the sake of the kingdom, it was time
that action should be taken. The letter bears witness to
his appreciation of his sister’s capacity; he went so far
as to ascribe his success to her good example, and expressed
his pleasure that the Scots nobles were so well inclined to
the service of the Queen. The letters to the Queen
Dowager at this time referred to the Regency which she
was to assume on the 12th April 1554, eight months
before her daughter’s twelfth birthday, as an established
fact. The Dowager Duchess of Guise3 welcomed the
change in the hope that her daughter would have more
peace; not that she doubted her power to work for the good
of the little Queen, but she feared her new neighbour,
Philip of Spain. The Duke of Guise4 wrote, about a
month after she had assumed the government, suggesting
that, while the country was at peace, she would do well to
see to the fortifying of the Border, ‘ so that your neighbours
may not come to visit you so easily.’ He was careful to
show that his advice was not given because he thought her
incapable of waging war as well as himself, but only in
1 Letter CXXX.
3 Letter CXLIII.
2 Letter CXL.
4 Letter CL.