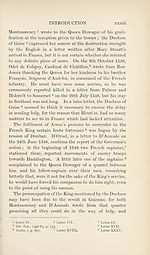 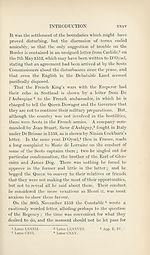 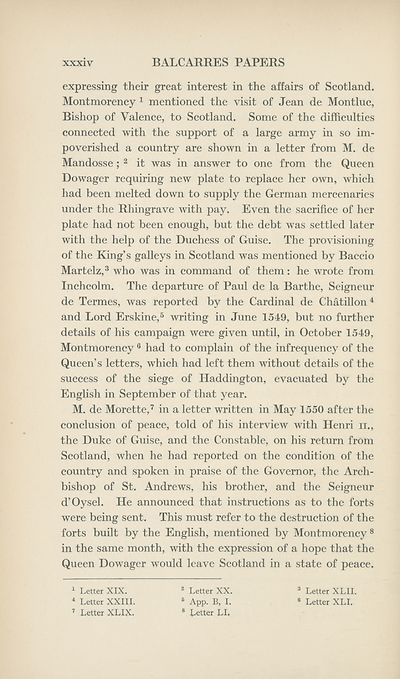 xxxiv
BALCARRES PAPERS
expressing their great interest in the affairs of Scotland.
Montmorency 1 mentioned the visit of Jean de Montluc,
Bishop of Valence, to Scotland. Some of the difficulties
connected with the support of a large army in so im¬
poverished a country are shown in a letter from M. de
Mandosse ; 2 it was in answer to one from the Queen
Dowager requiring new plate to replace her own, which
had been melted down to supply the German mercenaries
under the Rhingrave with pay. Even the sacrifice of her
plate had not been enough, but the debt was settled later
with the help of the Duchess of Guise. The provisioning
of the King’s galleys in Scotland was mentioned by Baccio
Martelz,3 who was in command of them: he wrote from
Inchcolm. The departure of Paul de la Barthe, Seigneur
de Termes, was reported by the Cardinal de Chatillon4
and Lord Erskine,5 writing in June 1549, but no further
details of his campaign were given until, in October 1549,
Montmorency 6 had to complain of the infrequency of the
Queen’s letters, which had left them without details of the
success of the siege of Haddington, evacuated by the
English in September of that year.
M. de Morette,7 in a letter written in May 1550 after the
conclusion of peace, told of his interview with Henri n.,
the Duke of Guise, and the Constable, on his return from
Scotland, when he had reported on the condition of the
country and spoken in praise of the Governor, the Arch¬
bishop of St. Andrews, his brother, and the Seigneur
d’Oysel. He announced that instructions as to the forts
were being sent. This must refer to the destruction of the
forts built by the English, mentioned by Montmorency 8
in the same month, with the expression of a hope that the
Queen Dowager would leave Scotland in a state of peace.
1 Letter XIX. 2 Letter XX. 3 Letter XLII.
4 Letter XXIII. 6 App. B, I. 6 Letter XLI.
7 Letter XLIX. 8 Letter LI.