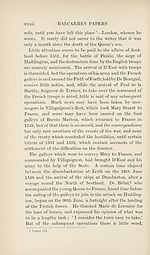 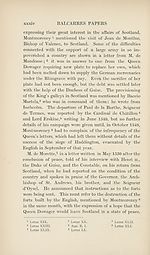 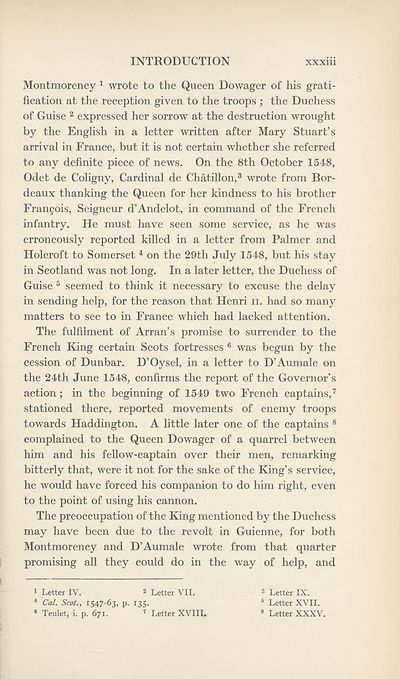 INTRODUCTION
xxxiii
Montmorency 1 wrote to the Queen Dowager of his grati¬
fication at the reception given to the troops ; the Duchess
of Guise 2 expressed her sorrow at the destruction wrought
by the English in a letter written after Mary Stuart’s
arrival in France, but it is not certain whether she referred
to any definite piece of news. On the 8th October 1548,
Odet de Coligny, Cardinal de Chatillon,3 wrote from Bor¬
deaux thanking the Queen for her kindness to his brother
Francois, Seigneur d’Andelot, in command of the French
infantry. He must have seen some service, as he was
erroneously reported killed in a letter from Palmer and
Holcroft to Somerset 4 on the 29th July 1548, but his stay
in Scotland was not long. In a later letter, the Duchess of
Guise 5 seemed to think it necessary to excuse the delay
in sending help, for the reason that Henri n. had so many
matters to see to in France which had lacked attention.
The fulfilment of Arran’s promise to surrender to the
French King certain Scots fortresses 6 was begun by the
cession of Dunbar. D’Oysel, in a letter to D’Aumale on
the 24th June 1548, confirms the report of the Governor’s
action ; in the beginning of 1549 two French captains,7
stationed there, reported movements of enemy troops
towards Haddington. A little later one of the captains 8
complained to the Queen Dowager of a quarrel between
him and his fellow-captain over their men, remarking
bitterly that, were it not for the sake of the King’s service,
he would have forced his companion to do him right, even
to the point of using his cannon.
The preoccupation of the King mentioned by the Duchess
may have been due to the revolt in Guienne, for both
Montmorency and D’Aumale wrote from that quarter
promising all they could do in the way of help, and
1 Letter IV. 2 Letter VII. 3 Letter IX.
4 Cal. Scot., 1547-63, p. 135. 5 Letter XVII.
• Teulet, i. p. 671. 7 Letter XVIIL 8 Letter XXXV.