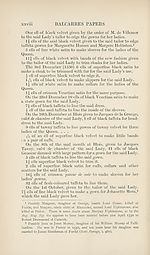 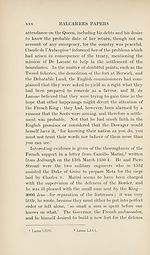 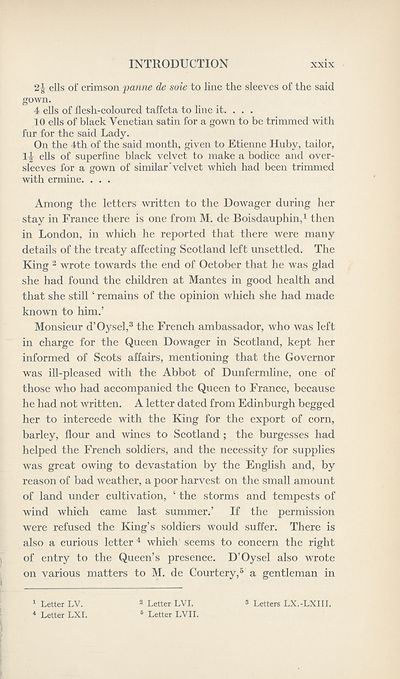 INTRODUCTION xxix
2^ ells of crimson panne de soie to line the sleeves of the said
gown.
4 ells of flesh-coloured taffeta to line it. . . .
10 ells of black Venetian satin for a gown to be trimmed with
fur for the said Lady.
On the 4th of the said month, given to Etienne Huby, tailor,
fi ells of superfine black velvet to make a bodice and over¬
sleeves for a gown of similar velvet which had been trimmed
with ermine. . . .
Among the letters written to the Dowager during her
stay in France there is one from M. de Boisdauphin,1 then
in London, in which he reported that there were many
details of the treaty affecting Scotland left unsettled. The
King 2 wrote towards the end of October that he was glad
she had found the children at Mantes in good health and
that she still ‘ remains of the opinion which she had made
known to him.’
Monsieur d’Oysel,3 the French ambassador, who was left
in charge for the Queen Dowager in Scotland, kept her
informed of Scots affairs, mentioning that the Governor
was ill-pleased with the Abbot of Dunfermline, one of
those who had accompanied the Queen to France, because
he had not written. A letter dated from Edinburgh begged
her to intercede with the King for the export of corn,
barley, flour and wines to Scotland ; the burgesses had
helped the French soldiers, and the necessity for supplies
was great owing to devastation by the English and, by
reason of bad weather, a poor harvest on the small amount
of land under cultivation, ‘ the storms and tempests of
wind which came last summer.’ If the permission
were refused the King’s soldiers would suffer. There is
also a curious letter 4 which seems to concern the right
of entry to the Queen’s presence. D’Oysel also wrote
on various matters to M. de Courtery,5 a gentleman in
1 Letter LV.
4 Letter LXI.
2 Letter LVI.
6 Letter LVII.
3 Letters LX.-LXIIL