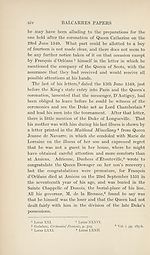 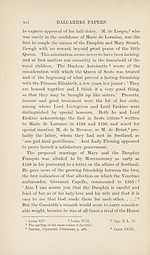 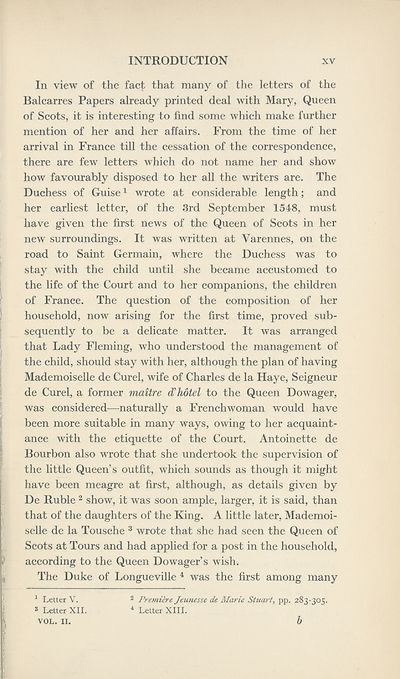 INTRODUCTION
xv
In view of the fact that many of the letters of the
Balcarres Papers already printed deal with Mary, Queen
of Scots, it is interesting to find some which make further
mention of her and her affairs. From the time of her
arrival in France till the cessation of the correspondence,
there are few letters which do not name her and show
how favourably disposed to her all the writers are. The
Duchess of Guise1 wrote at considerable length; and
her earliest letter, of the 3rd September 1548, must
have given the first news of the Queen of Scots in her
new surroundings. It was written at Varennes, on the
, road to Saint Germain, where the Duchess was to
stay with the child until she became accustomed to
the life of the Court and to her companions, the children
f of France. The question of the composition of her
! household, now arising for the first time, proved sub¬
sequently to be a delicate matter. It was arranged
that Lady Fleming, who understood the management of
l the child, should stay with her, although the plan of having
Mademoiselle de Curel, wife of Charles de la Haye, Seigneur
de Curel, a former maitre d'hotel to the Queen Dowager,
| was considered-—naturally a Frenchwoman would have
been more suitable in many ways, owing to her acquaint¬
ance with the etiquette of the Court. Antoinette de
j Bourbon also wrote that she undertook the supervision of
the little Queen’s outfit, which sounds as though it might
have been meagre at first, although, as details given by
De Ruble 2 show, it was soon ample, larger, it is said, than
that of the daughters of the King. A little later, Mademoi¬
selle de la Tousche 3 wrote that she had seen the Queen of
Scots at Tours and had applied for a post in the household,
I) according to the Queen Dowager’s wish,
ji The Duke of Longueville 4 was the first among many
2 Premiere Jeunesse de Marie Stuart, pp. 283-305.
4 Letter XIII.
1 Letter V.
2 Letter XII.
VOL. II.
h