Series 3 > Papers from the collection of Sir William Fraser 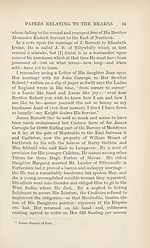 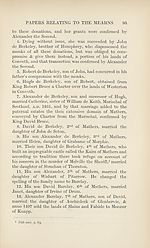 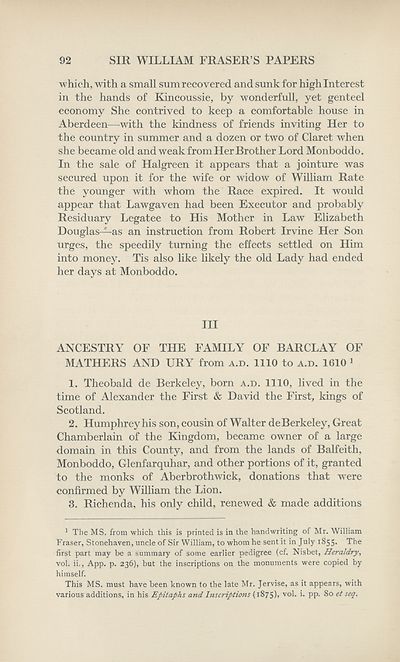 92
SIR WILLIAM FRASER S PAPERS
which, with a small sum recovered and sunk for high Interest
in the hands of Kincoussie, by wronderfull, yet genteel
economy She contrived to keep a comfortable house in
Aberdeen—with the kindness of friends inviting Her to
the country in summer and a dozen or two of Claret when
she became old and weak from Her Brother Lord Monboddo.
In the sale of Halgreen it appears that a jointure was
secured upon it for the wife or widow of William Rate
the younger with whom the Race expired. It would
appear that Lawgaven had been Executor and probably
Residuary Legatee to His Mother in Law Elizabeth
Douglas—as an instruction from Robert Irvine Her Son
urges, the speedily turning the effects settled on Him
into money. Tis also like likely the old Lady had ended
her days at Monboddo.
Ill
ANCESTRY OF THE FAMILY OF BARCLAY OF
MATHERS AND URY from a.d. 1110 to a.d. 1610 5
1. Theobald de Berkeley, born a.d. 1110, lived in the
time of Alexander the First & David the First, kings of
Scotland.
2. Humphrey his son, cousin of Walter deBerkeley, Great
Chamberlain of the Kingdom, became owner of a large
domain in this County, and from the lands of Balfeith,
Monboddo, Glenfarquhar, and other portions of it, granted
to the monks of Aberbrothwick, donations that were
confirmed by William the Lion.
3. Richenda, his only child, renewed & made additions
1 The MS. from which this is printed is in the handwriting of Mr. William
Fraser, Stonehaven, uncle of Sir William, to whom he sent it in July 1855. The
first part may be a summary of some earlier pedigree (cf. Nisbet, Heraldry,
vol. ii., App. p. 236), but the inscriptions on the monuments were copied by
himself.
This MS. must have been known to the late Mr. Jervise, as it appears, with
various additions, in his Epitaphs and Inscriptions (1875), vol. i. pp. 80 et seq.