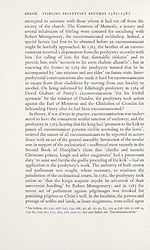 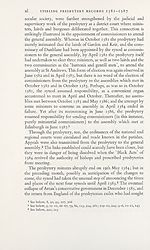 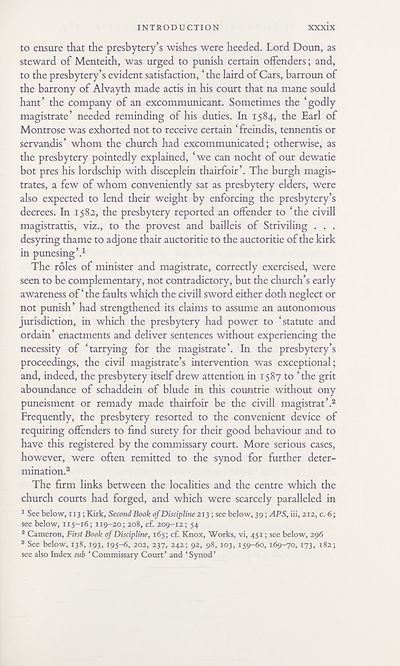 INTRODUCTION
XXXIX
to ensure that the presbytery’s wishes were heeded. Lord Doun, as
steward of Menteith, was urged to punish certain offenders; and,
to the presbytery’s evident satisfaction, ‘ the laird of Cars, barroun of
the barrony of Alvayth made actis in his court that na mane sould
hant’ the company of an excommunicant. Sometimes the ‘godly
magistrate’ needed reminding of his duties. In 1584, the Earl of
Montrose was exhorted not to receive certain ‘freindis, tennentis or
servandis’ whom the church had excommunicated; otherwise, as
the presbytery pointedly explained, ‘we can nocht of our dewatie
hot pres his lordschip with disceplein thairfoir’. The burgh magis¬
trates, a few of whom conveniently sat as presbytery elders, were
also expected to lend their weight by enforcing the presbytery’s
decrees. In 1582, the presbytery reported an offender to ‘the civill
magistrattis, viz., to the provest and bailleis of Striviling . . .
desyring thame to adjone thair auctoritie to the auctoritie of the kirk
in punesing’.1
The roles of minister and magistrate, correctly exercised, were
seen to be complementary, not contradictory, but the church’s early
awareness of ‘ the faults which the civill sword either doth neglect or
not punish’ had strengthened its claims to assume an autonomous
jurisdiction, in which the presbytery had power to ‘statute and
ordain’ enactments and deliver sentences without experiencing the
necessity of ‘tarrying for the magistrate’. In the presbytery’s
proceedings, the civil magistrate’s intervention was exceptional;
and, indeed, the presbytery itself drew attention in 1587 to ‘the grit
aboundance of schaddein of blude in this countrie without ony
puneisment or remady made thairfoir be the civill magistral’.2
Frequently, the presbytery resorted to the convenient device of
requiring offenders to find surety for their good behaviour and to
have this registered by the commissary court. More serious cases,
however, were often remitted to the synod for further deter¬
mination.3
The firm links between the localities and the centre which the
church courts had forged, and which were scarcely paralleled in
1 See below, 113 ; Kirk, Second Book of Discipline 213; see below, 39; /IPS, iii, 212, c. 6;
see below, 115-16; 119-20; 208, cf. 209-12; 54
2 Cameron, First Book of Discipline, 165; cf. Knox, Works, vi, 451; see below, 296
3 See below, 138, 193, 195-6, 202, 237, 242; 92, 98, 103, 159-60, 169-70, 173, 182;
see also Index sub ‘Commissary Court’ and ‘Synod’