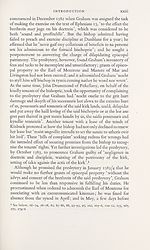 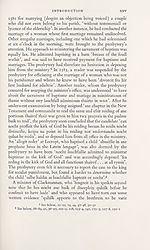 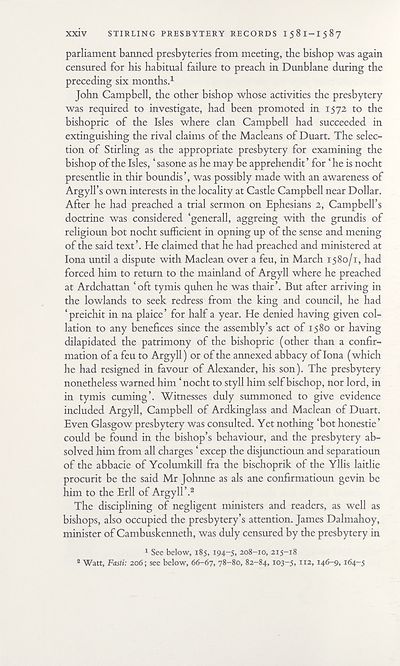 xxiv STIRLING PRESBYTERY RECORDS I581-I587
parliament banned presbyteries from meeting, the bishop was again
censured for his habitual failure to preach in Dunblane during the
preceding six months.1
John Campbell, the other bishop whose activities the presbytery
was required to investigate, had been promoted in 1572 to the
bishopric of the Isles where clan Campbell had succeeded in
extinguishing the rival claims of the Macleans of Duart. The selec¬
tion of Stirling as the appropriate presbytery for examining the
bishop of the Isles, ‘ sasone as he may be apprehendit ’ for ‘ he is nocht
presentlie in thir boundis’, was possibly made with an awareness of
Argyll’s own interests in the locality at Castle Campbell near Dollar.
After he had preached a trial sermon on Ephesians 2, Campbell’s
doctrine was considered ‘generall, aggreing with the grundis of
religioun bot nocht sufficient in opning up of the sense and mening
of the said text’. He claimed that he had preached and ministered at
Iona until a dispute with Maclean over a feu, in March 1580/1, had
forced him to return to the mainland of Argyll where he preached
at Ardchattan ‘oft tymis quhen he was thair’. But after arriving in
the lowlands to seek redress from the king and council, he had
‘preichit in na plaice’ for half a year. He denied having given col¬
lation to any benefices since the assembly’s act of 1580 or having
dilapidated the patrimony of the bishopric (other than a confir¬
mation of a feu to Argyll) or of the annexed abbacy of Iona (which
he had resigned in favour of Alexander, his son). The presbytery
nonetheless warned him ‘nocht to styll him self bischop, nor lord, in
in tymis cuming’. Witnesses duly summoned to give evidence
included Argyll, Campbell of Ardkinglass and Maclean of Duart.
Even Glasgow presbytery was consulted. Yet nothing ‘bot honestie’
could be found in the bishop’s behaviour, and the presbytery ab¬
solved him from all charges ‘excep the disjunctioun and separatioun
of the abbacie of Ycolumkill fra the bischoprik of the Yllis laitlie
procurit be the said Mr Johnne as als ane confirmatioun gevin be
him to the Erll of Argyll’.2
The disciplining of negligent ministers and readers, as well as
bishops, also occupied the presbytery’s attention. James Dalmahoy,
minister of Cambuskenneth, was duly censured by the presbytery in
1 See below, 185, 194-5, 208-10, 215-18
2 Watt, Fasti: 206; see below, 66-67, 78-80, 82-84, 103-5, 112,146-9.164-5